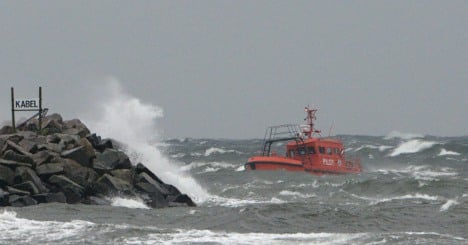 "Class-2 warnings can cause you a lot of trouble if you're thinking about heading out," Sofia Söderberg, meteorologist at SMHI, told the Aftonbladet newspaper.

The full brunt of the storm is expected to hit Sweden, particularly the southernmost parts, later on Thursday evening and likely throughout the night. Meteorologists have predicted up to 30 centimetres of snow in Svealand.

There was a brief flurry of snow in Stockholm shortly after midday on Thursday, and rainfall continued throughout the afternoon on the west coast.

Trains in southern Sweden were cancelled in the afternoon, and none will head across the Öresund bridge until further notice.

"We closed down the train traffic between Malmö and Ystad at midday. From 3pm we put a stop to the traffic on the minor lines in southern Sweden in Skåne, Småland, and Blekinge," Linus Eriksson of Swedish rail service SJ told the TT news agency.

"And we did not want to run the risk of crashing into a tree flying at 160 kilometres an hour," he added, referring to a tree that blew into power lines cutting power to local the train lines.

Some ferry routes to and from southern Sweden have also been cancelled.

Many municipal recreational facilities have been closed down around Malmö, including bowling and swimming halls, ice skating rinks, and gyms.

Aftonbladet had one reporter out on the streets of Malmö, with one interviewee stating that it was so windy that it was hard to keep her feet on the ground.

Meanwhile, also in Skåne the search for two missing sailors in Ystad is being scaled back as a result of the storm with Sven expected to generate waves over two metres high.
The pair are understood to have fallen overboard a Dutch cargo ship outside Ystad. A rescue team was sent out to retrieve the men but have been unable to locate the pair.
"We have searched thoroughly but have been unable to find anything. Given that the weather is going to get worse…we feel that we can't do any more," said Christer Haglund of the maritime rescue services to the TT news agency.
It remains unclear why the men were out on deck with conditions for the rescue team described as "severe" by those involved in the operation.
Energy companies are on their toes anticipating the worst, with emergency teams on the ready in case electricity is lost.

The storm surged through Scotland on Thursday with wind speeds of over 160 kilometres per hour, claiming the life of at least one person.