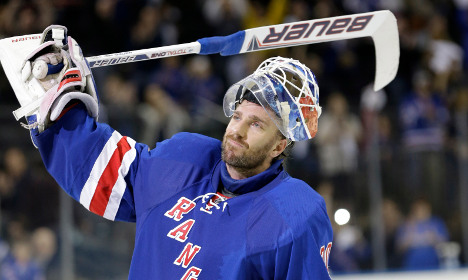 Henrik Lundqvist on the ice in May 2013. File photo: AP

"I really want to win a (Stanley) Cup here," Lundqvist said. "It's my biggest goal and it pushes me to work even harder."

Lundqvist would have been a free agent next year.

"I want to be a Ranger for life," he said. "That was a big thing that became really clear to me. To picture myself anywhere else, it was just wrong. In my heart it was never an option to play anywhere else."

Lundqvist, 8-11 this season with a 2.51 goals-against average and a 91.7 percent save rate, has been a finalist for the Vezina Trophy as the NHL's top goaltender in five of the past eight seasons, winning the award last year.

"He is everything you would want on and off the ice," said Rangers owner James Dolan. "He is the model of what you want in a player and a leader."