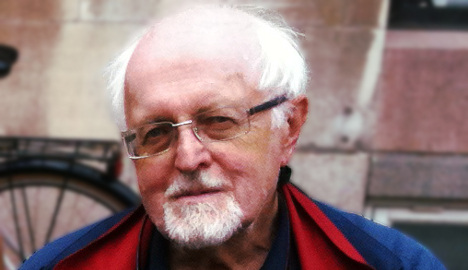 "I don't think there are many people who can say they've been to as many Nobel lectures in physics as I have," 79-year-old Hans-Olov Zetterström tells The Local.

On Sunday, which incidentally marks his 80th birthday, Zetterström will head to yet another lecture to hear what 2013 winners Peter Higgs and Francois Englert have to say about their own discoveries. And while the topic may be a new one for Zetterström, the laureates join an ever-increasing pool of experts that he has seen in the flesh.

"I've been going since 1954 when they used to hold them in the Royal Technical Institute. I calculated recently that I have heard 70 percent of all Nobel Physics laureates throughout history," he explains. "And it's been fascinating."

So who better to give us a run through of the highlights than the former nuclear physicist himself? Zetterström answers five questions from the past sixty years, and predicts what viewers can expect on Sunday.

"And who knows," he adds with a chuckle. "Maybe it's not too late to come up with a Nobel Prize winning idea for myself…. But I'm having my doubts."

What makes a good lecture?

The best lectures are those that take you from a very elementary stage, and very gradually, step by step, explain the evolution all the way through to the final discovery, especially if they can make you feel like you truly understand – even though it's often the case that you don't. But it's mixed, sometimes a lecturer can make you fall asleep too. The best ones are when the speakers are actually university lecturers themselves, they know how to put on a good show and make you feel like you're keeping up with what they're saying.

What was the most memorable lecture, and why?

There's no doubt in my mind, the best was Richard Feynman and his talk on quantum electrodynamics [Ed's note: Feynman was an American theoretical physicist and 1965 Nobel winner]. When he came in, he didn't give a written lecture like they usually do. He gave us a speech about the art of becoming a Nobel Prize winner and how to take care of unusual ideas. It was fascinating, it was a real one-man show. They didn't tape the lectures in those days, and I don't think there is any copy of the talk available, but it was fantastic and very inspirational.

And to top it off, me and some friends had heard that Feynman played exotic drums as a hobby. After the lecture, we went up to him and invited him to an exotic drum party as we'd managed to get hold of a set… Feynman was keen if we could do it right then and there, but we didn't have the drums with us, and his organizer said there was no other free time in their busy schedule, so there was no drum party, unfortunately… but we came so close!

Which lecture was the most important in the past 60 years?

The Nobel Prize for the cosmic microwave background in 1978. It was one of the real unique discoveries, it was giving evidence of the beginning of the universe, the Big Bang. If not that, then it would have to be 2011 prize to the gentlemen who discovered the accelerating expansion of the universe. Absolutely fascinating.

Why do you attend every year?

There is nothing more exciting for me than hearing the person who actually made the discovery talking about it in their own words. Being there and feeling like you're actually a part of it is a thrilling experience, and so much more lively than just reading the work on paper.

What do you expect this time around?

I expect it will be a very good lecture indeed. The gentlemen who won the prize are around my age so that will be a fun start for someone like me. In 1964 they predicted a new kind of elementary particle. They are lucky to have lived long enough to experience the discovery of the particle in 2012, which led to the prize. But I've got no idea what we can expect on Sunday. I've seen them on TV though, and they seem to be quite good.

For those wishing to follow along live, the lecture will be streamed on the official Nobel website from 9am on Sunday. Head on down to the Aula Magna Auditorium at Stockholm University if you want to see it live. Tickets are free.