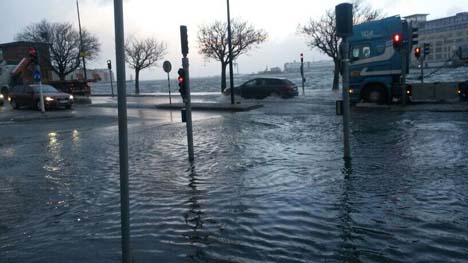 Localized flooding in the western harbour district of Malmö caused by storm Sven. Photo: The Local

Storm Sven has huffed, puffed and blown plenty away in southern Sweden. Malmö has borne much of the battering with localized flooding and many people left without power.

For days there has been talk of little else in this part of the country. Sven was on the doorstep and locals weren't referring to ex-England manager Sven-Göran Eriksson showing up to plug his new book.

Ah yes, the weather, the source of endless screaming front pages with bizarre tick boxes. Malmö, with its milder climate, often escapes the more extreme weather attacks with locals having the odd chuckle when Stockholm is hit with its latest blizzard.

Sven though wasn't going to spare Skåne. Stepping outside the door was a challenge, that was if you were able to prise it open in the first place, when the gales were at their worst.

Whilst out on some errands this reporter bumped into a man who was attempting to make his way home by bike.

"Don't try this yourself," he laughed as he attempted to pedal his way through town.

The winds were up and the weather was "blowing" as a Swedish relative of mine says when providing his own weather forecast in English.

At a local day care parents rushed in to pick up their children. A woman said – totally deadpan – that it was "rather windy out there." Just a bit.

One of the worst hit areas was the city's upmarket western harbour district where rents are almost as high as the nearby Turning Torso landmark.

In the summer it's the place to be but the district's close proximity to the Öresund strait means flooding is often a problem when a storm kicks up.

A friend who lives in that part of town described Thursday night's storm as "hellishly windy."

"I thought the balcony was going to fall off as it was shaking so much," he said.

Not far from the western harbour is the famed Kallbadhuset sauna which was being lashed with tall waves. The Öresund Bridge finally re-opened on Friday after its closure left hundreds stranded in Copenhagen airport.

The Swedish Transport Administration was prompted to send out a warning urging people not to use vehicles which may be susceptible to gale force winds.

Perhaps they should have extended that warning to parents trying to manoeuvre pushchairs. On Friday morning there was the frankly scary sight of mums and dads gripping onto the handlebar of their stroller on the way to dagis during a hailstorm.

One person, with a new fangled three-wheel stroller, had to wrestle with the pushchair as its wheels were lifted off the ground. Meanwhile, local daycares in the city sent out memos saying children needed to remain indoors.

By mid-Friday morning the worst of the storm appeared to be over and even the sun came out for a bit. Nevertheless, it was a relief to be back indoors.