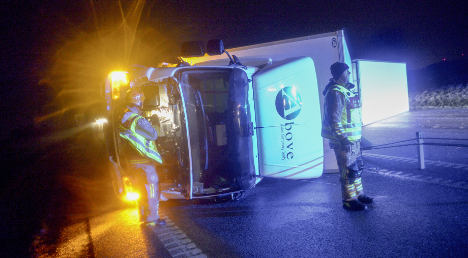 Photo: Johan Nilsson/TT
A man was found dead at 9am on Friday on a small road in Älmhult, southern Sweden, and police confirmed that he was hit by a tree that had been uprooted in the winds.
Power companies Eon, Vattenfall, and Fortum reported 47,000 customers were without power on Friday morning after Sven battered Sweden's southwest with winds over 150 kilometres per hour.
Swedish weather agency downgraded warnings for Halland and Skåne from class 3, the highest level, to class 2 on Friday morning.
Class 2 warnings remain in effect for Värmland, Dalarna, Gävleborg counties, as well as for Sweden's east coast in the Uppland and Roslag regions north of Stockholm.
A spokesman at Sweden's traffic agency Trafikverket said that fallen trees were the root of the traffic problems, mostly in Skåne, Halland, and Bohuslän.
IN PICTURES: Scenes from storm Sven
The town centre in Helsingborg, southern Sweden, has been closed off for fear of Christmas decorations coming loose and causing damage.
There has been no shortage of traffic accidents either, with a local bus ending up in a ditch in Herrljunga, a truck upturned near Ljungby, and three trucks in a crasg near Tolkabro. The upturned truck, on the E4 motorway, has left long queues southbound motorists.
While traffic has been reopened along the Öresund bridge, there are still no train lines running in the southern reaches of Sweden.
In Stockholm, winds are expected to reach 15 metres a second later on Friday, and will bring snow with them.
"It will be somewhere around 5-10 centimetres," Mats Persson at Sweden's weather agency SMHI told TT.
The most snow is expected to fall on southern Norrland, the northern reaches or Värmland, Dalarna and Gävleborg. Persson predicted 20 centimetres of snow "in the worst case" along the Upplands coast.
The snow is expected to remain over the weekend.