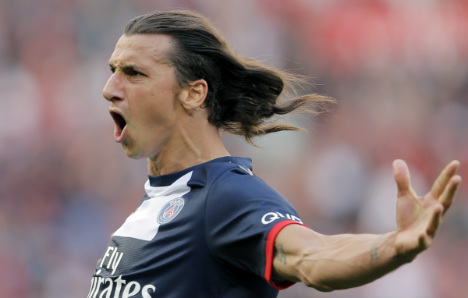 The big Swede took his league goals tally to 13 thanks to an all-round masterclass which helped PSG quickly recover from their midweek loss to Evian in what was their first defeat of the season.

That setback ended PSG's 36-match undefeated run and it was rock-bottom Sochaux who were cast in the role of fall guys on Saturday.

Ibrahimovic scored twice in the last five minutes after Thiago Silva, Ezequiel Lavezzi and Edinson Cavani, with his 11th of the season, had also hit the target.

"They play a lot but they are the major players in our team," said Blanc.

"All big clubs need their most important players. There are just two more matches until the winter break and the league is our objective as we have already done our work in the Champions League (PSG are certain of a last 16 place).

"I will try to put together the best team possible to take the points in these two league games."

PSG were on top from the start at the Parc des Princes where Sochaux had lost on their last five visits, conceding 16 goals.

Ibrahimovic had two early opportunities — grazing the post in the eighth minute before smashing a free-kick into the wall, five minutes later.

Their pressure told after 14 minutes with the Swede once again involved.

His pass to the far post allowed Silva to slot the ball right-footed past Pierrick Cros in the Sochaux goal.

Ibrahimovic then freed Thiago Motta who was thwarted by the busy Cros.

PSG continued to toy with the visitors with Marco Verratti, Cavani and Maxwell causing a string of problems.

Cavani came closest to adding a second goal just on the stroke of half-time when his 20-metre drive was kept out by Cros.

PSG were rewarded for their endeavour with a second goal in the opening minute of the second half.

Lavezzi scored from a Motta pass although there was a hint of offside when the Argentine striker collected the ball.

On the hour mark, Cavani made it 3-0 and again Ibrahimovic was involved.

The Swede crossed for Cavani at the far post who controlled the ball before quickly hitting the target.

Ibrahimovic deservedly grabbed the fourth in the 85th minute with a brutally-struck free-kick from 20 metres which fizzed past the despairing dive of Cros.

Cavani then teed-up Ibrahimovic in the 89th minute for the fifth.

Lille can close the gap on PSG to one point with a win at Bordeaux on Sunday while third-placed Monaco, who are five points off the lead, meet Ajaccio.