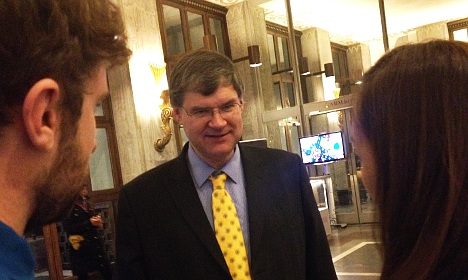 When The Local meets Professor Charlton, he's perched in a chair in the Stockholm Concert Hall, Konserthuset, where the 2013 laureates will receive their prizes from King Carl XVI Gustaf.

While this low-key physicist with a booming voice and a warm smile won't be on hand for the festivities, the two winners of the 2013 physics prize, Peter Higgs and François Englert, might not have received recognition for their achievement if it weren't for the work of Charlton and his colleagues.

But the self-deprecating Charlton doesn't need a fancy medal emblazoned with a portrait of the famed Swedish industrialist whose name has become synonymous with great achievements in science.

"It's a very nice recognition," he says.

"It's clear that to the outside world the Nobel is an important signal for leading-edge science, that this is important. To us as scientists, however, the important thing is that we've made this big leap in our understanding of science. This is worth more than all prizes."

Charlton is in Stockholm to give a talk on the significance of the Higgs particle, a particle first theorized in the 1960s by Higgs and Englert, and the existence of which was confirmed in 2012 by researchers at Cern, the common acronym for the European Organization for Nuclear Research, which operates the world's largest particle physics laboratory.

"I think it's great they awarded the prize for the development of the theory 50 years ago. That's what the prize is for," he explains. But he doesn't shy away from mentioning that he and others at Cern likely played a vital role in Higgs being recognized by the Swedish Academy's Nobel committee.

"Of course, it's only now they could give them the prize because it's only now that we know the theory is right. I don't think they would have won the award without the Higgs boson being discovered."

The British physicist, who is also tied to the University of Birmingham in the UK, acts as the spokesperson and "overall manager" for the Atlas experiments conducted at Cern, and which received a mention in the citation explaining Higgs' and Englert's win.

"It's the biggest experiment in the world," he says with a laugh.

As Atlas involves roughly 3,000 people spread across more than 170 institutions in 38 countries, Charlton's claim isn't as hyperbolic as it may first seem. Merely getting the experiment off the ground took 20 years. And plans call for the experiments to run for at least another 20 years, during which time scientists hope to learn more about the Higgs particle, and – hopefully – make other groundbreaking discoveries.

"There's a huge amount to learn about the Higgs even if there is nothing else new to discover," Charlton explains.

Charlton is also quick to praise the work of the four Swedish institutes, Uppsala University, Stockholm University, Lund University, and the Royal Institute of Technology (KTH), that participate in the work at Cern.

"They work on four different pieces of the experiment, but the contributions of the Swedish groups are really crucial for the experiment," he says, adding that he makes regular visits to Stockholm to check in on things.

SEE ALSO: The Local's guide to Nobel Week in Stockholm

He admits that the Atlas and CMS experiments conducted at Cern that confirmed the existence of the Higgs "won't change everyday life" in the next few years, but that the importance of the work shouldn't be underestimated.

"With the discovery of the Higgs, we've learned something very fundamental about the universe," Charlton explains.

"We used to think of a vacuum as being nothingness, but in reality there is something there and that's the Higgs field."

Charlton gives all credit to Higgs and Englert for the predicting the existence of the Higgs particle five decades ago and gave direction for the experimental work at Cern.

"I find it astonishing that mathematical symmetries discovered 50 years ago predicted this thing," he says.

"And I hope people are interested in fact that we don't know what 95 percent of the universe is. It's mind-boggling."

The work at Cern has also helped "push the boundaries of technology" in terms of the equipment and computing power needed to run the experiments.

One innovation in particular that evolved out of work at Cern has already had a rather large impact on everyday life.

"There are many who've said the web could only have been invented at Cern," Charlton says, cautioning as only a scientist could that the claim can't be confirmed by any independent experiment.

"But it's certainly true that the very openness of the science that we do was part of the reason the web came when it did and it was able to become very successful before big companies started to join."

Indeed, British scientist Tim Berners-Lee, often cited as the "inventor" or the world wide web, was working at Cern when he proposed a system that would allow the lab's myriad of global collaborators to share information more easily.

Right now, the facilities at Cern are "off" for two years of scheduled upgrades and maintenance before experiments resume in 2015. But that doesn't mean that researchers involved are taking it easy.

"There's still a lot of analysis of the data to be done," says Charlton, adding that the "massive" global computing network involved in crunching and passing around the numbers is also being overhauled.

The lab's pivotal role in confirming the existence of the Higgs particle led many to argue that Cern itself should have been included among the winners of the Nobel. Indeed, the prize announcement was delayed about an hour reportedly over arguments about how the experiments should be recognized.

When asked if Cern should win a Nobel Prize, Charlton pauses before responding diplomatically:

"That's a question for the Academy and the Nobel committee to decide."

But he agrees that current Nobel tradition of awarding the prize to individuals, rather than institutions or groups, for scientific achievements may be due for a rethink in a day of global collaboration.

"It's a thorny issue," Charlton explains.

"It is clearly the case that the science we do in these types of experiments isn't attributable to one particular individual. They are very collaborative. If they wanted to award the Nobel Prize for this type of science I think it would be difficult to only give it to specific individuals."

Even if the Nobel were to go to a group or institution, Charlton emphasizes that Cern "may not be the right body" to recognize.

"The experiments are more than Cern; they really are global experiments," he says.

DON'T MISS: From the stands: Sixty years of Nobel Prizes