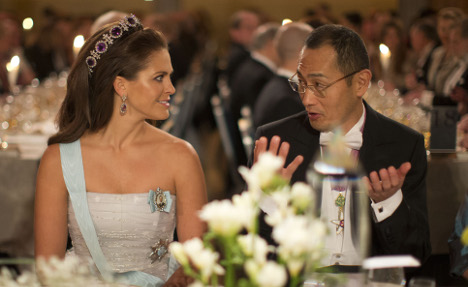 Madeleine talks with Nobel Prize Laureate for Physiology or Medicine Shinya Yamanaka at the 2012 gala. Photo: AP
Tuesday's Nobel banquet at Stockholm's City Hall will be without the likes of Prime Minister Fredrik Reinfeldt and two of the three Swedish princesses.
"Some people will be moved up and we will have to rearrange the spots at the main table," Annika Pontikis of the Nobel board told the TT news agency.
SEE ALSO: The Local's guide to Nobel week
"We'll announce how it's going to look at 2pm today," she said on Monday.
The prime minister and Princess Victoria will instead be in South Africa for a memorial for Nelson Mandela, who died on Thursday night after a long battle with his health.
IN PICTURES: See Nelson Mandela and his connections to Sweden
Reinfeldt will be replaced by Jan Björklund, the deputy prime minister and leader of the Liberal Party (Folkpartiet).
Princess Madeleine, who announced in September that she was expecting her first child, had to turn down the invitation due to her pregnancy. Her husband, financier Chris O'Neill, said in October that due to work commitments he would also miss the event.
"It saddens me that I won't be able to attend the Nobel Festivities this year," the princess wrote on her Facebook page. "Due to the fact that I'm expecting a baby girl in February, it would be hard for me to participate in the lengthy program over the two days. My heart, however, will be in Stockholm."
IN PICTURES: See Princess Madeleine through the years
The banquet, which is annually held on December 10th to mark the anniversary of Alfred Nobel's death, has been held at Stockholm City Hall since 1926. Laureates accept their prizes and give a short speech to guests, with the entire event televised by Sveriges Television (SVT). The guest list numbers around 1,300 people, 250 of whom are students.