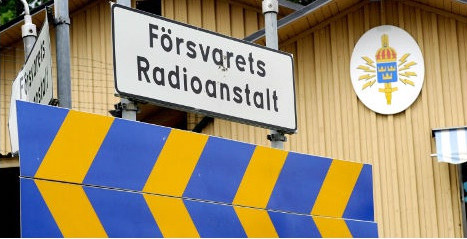 Agrell argued that the revelations of the agreement raise serious questions regarding Sweden’s non-alignment self-image.

“This is an ongoing alliance relationship in peacetime,” he observed.

The top secret agreement was signed in 1954 by Sweden with the US, UK, Canada, Australia and New Zealand regarding collaboration and intelligence sharing, according to SVT’s investigative news programme Uppdrag granskning (UG).

The agreement was wound up in 2004 and was replaced by bilateral agreements which bound Sweden's National Radio Defence Establishment (Försvarets radioanstalt, FRA) closer to the United States National Security Agency (NSA) and British intelligence agency GCHQ.

The leaked Snowden documents reveal that FRA’s cooperation with the NSA intensified in 2011 and that FRA provided the NSA with access to its cable-bound communications traffic during the year, including access to a "unique collection of Russian high-priority targets”.

NSA is aware of how sensitive this type of extensive cooperation is in Sweden, which has long prided itself on a principle of neutrality and non-alignment.

"The relationship with Sweden is protected on the top-secret level because of the country's political neutrality," the NSA stated in a document from 2006, according to UG.

FRA responded to the revelations, telling UG that the agency never gives full access to cable-bound communications, but that information disclosed is carefully assessed.

“We will not give away something without getting anything in return. We are able to gather information in our part of the world, which we can then exchange with information from other parts of the world that would be more difficult to obtain,” said Fredrik Wallin at FRA to UG.

“This may be information that is of great importance for Swedish foreign policy,” he added.

A separate report revealed that Sweden was able to predict the 2008 Russia-Georgia war, a conflict which the US was unable to foresee.

“We could see how the Russians advanced units and how it then went quiet. This meant that everything was in place and the final preparations had been made to strike,” an anonymous source revealed according to a report in the Svenska Dagbladet daily.

The reports come amid revelations about the extent of US-led international signals intelligence activities, including revelations last week that Sweden spied on Russia on behalf of the US.

The documents describe FRA as a "leading partner" in the NSA's international cooperation to monitor communications traffic around the world.

New revelations which emerged over the weekend indicated that the surveillance included civilian targets within for example the Russian energy sector, and that the Baltic countries were also targeted by FRA. This information was subsequently shared with the US.

Wilhelm Agrell argued that the revelations of FRA spying on Russian civilian targets is hardly surprising.

“It's so obvious that security today is not only military. This is quite obviously part of an economic intelligence gathering, moreover, an activity that Sweden has conducted since the 50s directed against the Soviet Union and other Eastern European countries,” he said to the TT news agency.

Agrell argued that it can be difficult to assess whether FRA’s espionage against civilian targets runs contrary to the law.

“It can be difficult to see exactly where the extent of the law ends in practice; then you have to really consider the nature of the information. But we are perhaps getting to this point when non-state actors are the subject,” he added, explaining that when espionage focuses on friends and allies it becomes more a political than regulatory issue.

The new slew of revelations also intensify focus on the question of how involved the US and Britain were in the adoption of the so-called FRA law by Sweden's Riksdag in 2008.

“If it is the case that there is a foreign link in the creation of the act, then one can detect the seed of a rather significant future political scandal in Sweden, concerning the issue of who is really in charge of Swedish security policy,” Agrell said.

He added that it would be particularly problematic if it emerged that the NSA has blanket access to FRA information, something denied by the Swedes.

Both FRA and the Swedish government have pointed out that Sweden's laws allow for international cooperation, but won't specify with which countries.

"A partner can't control us; what we cooperate on lies within the framework of the guidance the Swedish government has given us," Dag Hartelius, the recently installed head of FRA, said a month ago.

FRA is authorized to monitor cable-bound communications traffic to track "external threats" against the country. The intelligence gathering can only be directed toward foreign countries.

The government, military, Swedish Security Service (Säpo), and the National Bureau of Investigation (NBI) can order intelligence material from FRA. The agency can also share information with other countries.

Permits are authorized by a secret court, the Defence Intelligence Court (Försvarsunderrättelsedomstolen).