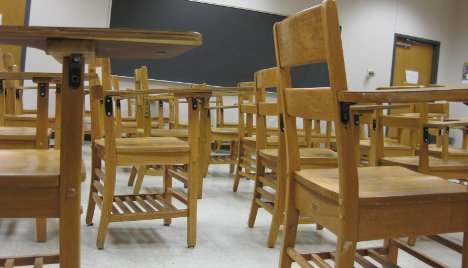 File photo: Alamosbasement/Flickr
Sweden's schools are currently run at the munipality level, meaning that each of the country's 290 municipalities  take responsibility for everything from pre-school to adult education. Each municipality funds the schooling through local tax revenues, with the help of a general government grant.
Last week's Pisa education ranking, which saw Sweden drop below  the OECD average in maths, reading comprehension, and natural sciences, has left many of Swedes keen to reintroduce a nationalized schooling system, which was abolished in 1991.
On Monday, Sveriges Television (SVT) published figures that gauged Swedes' reactions to the current schooling system, in which pollsters Sifo found that 61 percent of Swedes thought the national government should take over, while only 12 percent disagreed. The rest remained unsure.
The results came from a wide range of people, with varying ages and political persuasions, Toivo Sjörén at Sifo told SVT. He added that there was a definite level of uncertainty among those polled.
"But the sense is that something needs to be done," he said. "And it's clear that the Pisa results have played a large part in this."
Others blamed the slump on Swedish parents' choice between municipality-run schools and free schools, as the growing inequalities between the schools has seen a similar gap in results.
Anders Jakobsson, a professor at Malmö University, is among those who blame Sweden's drop in the rankings on "school choice". The gap between the best and worst schools, he explained, has doubled in natural sciences and tripled in reading comprehension during the 2000s.
"Many schools have lost their most ambitious students due to school choice, and our reasoning is that the ambition levels of the teachers are dropping when ambitious students leave the schools," he told the TT news agency.
In the countries that perform more strongly in the Pisa ranking, there is less of a difference between the best and worst students, he added.
The Pisa results found that Sweden came out on average worse than the UK and the US, and fell harder than all other 32 countries measured. Sweden performed particularly poorly in mathematics, where students suffered a fall that was the worst of all countries over a ten-year period.
Sweden's Education Minister Jan Björklund on Tuesday blamed the country's fall from grace  on municipalities' "lack of competence", saying his government should have nationalized the schools already seven years ago when the current government came to power.