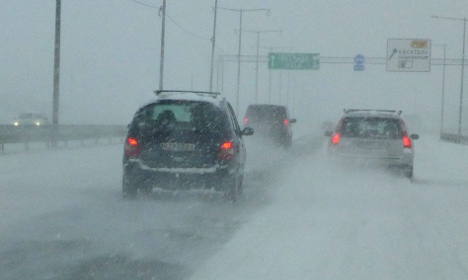 Sweden was awash with winter weather over the weekend, with southern Sweden once again hit among the hardest.

Southern reaches of the country including Skåne and Halland were hit particularly hard.

"According to the prognosis, we will unfortunately have customers without electricity even into Monday," Maria Bergman at Fortum told the TT news agency.

Sunday saw snow storms across the country and traffic in Gothenburg was brought to a stop. All trams and many buses were either cancelled or delayed in the morning and the Swedish Transport Administration warned Gothenburgers to stay off the roads.

Icy roads meant several accidents, but no one was reported injured on Sunday.

Meteorologists at the Swedish Meteorological and Hydrological Institute, SMHI, said that Swedes could expect a turn for the better by Tuesday, with temperatures in Svealand and further south expected to reach above zero.

Meanwhile, in the far north, temperatures plummeted over the weekend. Nikkaluokta recorded -40C at 3am on Monday.