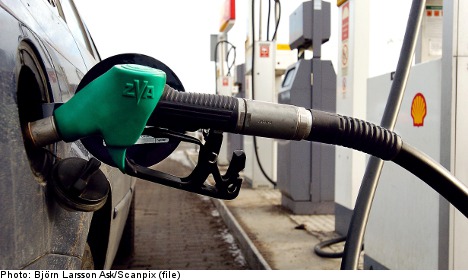 The current government has planned to cut back on the transport sector's dependence on fossil fuels, aiming for an 80-percent decrease within 16 years.
If Sweden is to reach this goal petrol prices need to be drastically increased, the National Institute of Economic Research (Konjunkturinstitutet, KI) reasoned in a report published on Tuesday.
"We want to make it clear what needs to be done in order to achieve the government's vision of a vehicle fleet that is independent of fossil-fuels," Eva Samakovlis, researcher at KI, told the Dagens Nyheter newspaper (DN).
"These are drastic measures that come with large economic costs and that can be hard to implement."
Researchers proposed a hike in petrol prices by at least 30 kronor ($4.68) per litre, based on a 900-percent increase on carbon taxes. Current fuel prices in Sweden are around 12 kronor per litre, meaning the price of an average litre of petrol would be 42 kronor.
In making such a dramatic change, the institute proposed that Sweden would be able to advance as much as 20 years ahead of any other country in the EU when it comes to cutbacks of fossil fuels.
The government has funded its own report on the matter which is expected to be published on Monday.