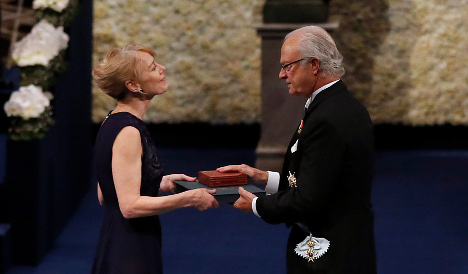 "Nelson Mandela embodied the struggle for freedom, democracy and humanism, and was one of the greatest statesmen of our time," chairman of the board of the Nobel Foundation Carl-Henrik Heldin said in his speech.

The formal event, traditionally held at Stockholm's Concert Hall on the anniversary of the death of prize founder Alfred Nobel in 1896, was not attended by Crown Princess Victoria of Sweden, who was at Mandela's memorial service in South Africa, as was Prime Minister Fredrik Reinfeldt.

Police confirmed the incident and said the four, whose nationalities were not immediately known, had been arrested on charges of disorderly conduct.

The laureates received their prizes from Swedish King Carl XVI Gustaf after the speech by Heldin, who highlighted the importance of science and research in times of crisis.

"As a result of the economic problems the world is now experiencing, many countries have chosen to reduce their support for research," he said.

"This is unfortunate. Today, it is more important than ever to continue and even increase support for research, in particular for basic research."

The Nobel literature laureate, 82-year-old Canadian Alice Munro, was unable to attend the ceremony and her daughter Jenny received the prize on her behalf.

Munro, the 13th woman literature laureate, was awarded the Nobel for her short stories focusing on the frailties of the human condition.

Three US academics, Robert Shiller, Eugene Fama and Lars Peter Hansen, picked up the Nobel Economic Prize for research on financial markets, an area of immense real-world implications amid the crises that have rattled the global economy in recent years.

The Nobel Medicine Prize was handed to another trio of US scientists, one of them German-born.

The Chemistry Prize was presented to Martin Karplus, a US-Austrian citizen, Michael Levitt, a US-British citizen, and Arieh Warshel of the United States and Israel for developing computer models to simulate chemical processes, providing a revolutionary tool for drug designers and engineers.

Peter Higgs of Britain and Francois Englert of Belgium received the Physics Prize for theorizing a particle — discovered last year after an agonizing quest — that explains why the Universe has substance.

The Nobel Prize consists of a gold medal, a diploma, and eight million kronor ($1.22 million).

Earlier on Tuesday in Oslo, the Nobel Peace Prize was awarded to the Hague-based Organization for the Prohibition of Chemical Weapons for its efforts to rid the world of the devastating weapons.

Following the prize ceremony, the new laureates were honoured at a formal dinner banquet at Stockholm City Hall attended by the royal family and some 1,300 guests, although a number of notable names were missing, requiring a reworking of the seating chart at the head table.

IN PICTURES: Scenes from the Nobel banquet

Princess Christina, sister of the king, took Crown Princess Victoria's place, while Lu Chen, wife of medicine laureate Thomas Südhof, took the place of Princess Madeleine, who announced at the weekend should would not be able to attend the event. Deputy Prime Minister Jan Björklund sat in Reinfeldt's place, while Financial Markets Minister Peter Norman took the place of Finance Minister Anders Borg, who was at a meeting in Brussels.

Guests then feasted on a menu prepared by star chef Andreas Hedlund that started off with a Guinea hen mosaic, accompanied by a carrot variation with Gotland truffle and chanterelle duxelle with truffle mayonnaise.

The main course consisted of turbot cupola stuffed with Norwegian lobster, tartelette with lobster on a bed of cream cheese and spinach, pointed cabbage terrine, lobster sauce and almond potato purée. For dessert, guests were served chocolate silhouette with nougat and a sea buckthorn explosion.

The massive banquet, held in the Blue Hall of Stockholm's iconic City Hall, required 500 metres of table linens spread across 60 tables, the TT news agency reported. Guests were served on an estimated 7,000 dishes, 5,400 glasses, and 10,000 pieces of flatware.