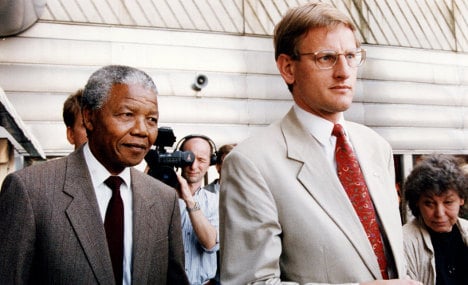 Nelson Mandela and Carl Bildt during a May 1992 visit to Stockholm. File photo: Bertil Ericson/TT

Social Democrat Carina Hägg and former Left Party head Lars Ohly have argued that the Moderates should apologize for not supporting Mandela's ANC party and the anti-apartheid movement in South Africa.

"They naturally should admit that they were wrong," Ohly told Sveriges Television (SVT).

"We've made mistakes, just like all parties do. We in the Left Party have been clear that we were wrong in the past. It's not any harder than that. Apologize, Fredrik Reinfeldt."

But Bildt countered that his party had nothing to apologize for.

"We distanced ourselves from apartheid, but in a different way. They shouldn't try to monopolize this. Go back and see what we said and did. There was a very clear distancing from the system of apartheid. To claim anything else would be treading on a falsehood," Bildt replied.

In 1987, the Moderates voted against a government bill to implement a trade embargo on South Africa.

"That's true. We were sceptical toward unilateral Swedish sanctions. That's a position we have today as well and which the Social Democrats have had on many occasions," said Bildt.

When Denmark and Norway in 1986 implemented a trade embargo against South Africa, the Social Democratic government was still opposed to the idea.

"Unlike Denmark and Norway, Sweden is neutral and can't violate international law and the GATT international trade agreement," Ingvar Carlsson, the Social Democrat prime minister, said at the time.

The Social Democrat-led government wanted the UN Security Council to decide on sanctions, something the body failed to do, save for a weapons embargo. However, there was a movement for a trade boycott among the UN General Assembly.

In 1987, the Swedish government nevertheless proposed implementing a trade embargo against South Africa that was supported by all political parties in the Riksdag except the Moderates.

But Bildt doesn't see anything wrong with the Moderates' position, questioning the role the sanctions may have played in the end of apartheid.

"That's for historians to evaluate what prompted everything. The threat of sanctions may have played some role. But the decisive factor was internal changes in South Africa. I think the collective international moral pressure was more important than the game of Swedish investments, which I don't think mattered so much," said Bildt.

But it wasn't just the Moderates who were against unilateral Swedish sanctions against South Africa. Trade union Metall was also opposed and preferred cooperating with groups other than the ANC.

Commenting on the debate in a commentary published on the website of the Borås Tidning (BT) newspaper, historian and commentator David Lindén pointed as well on current Social Democrat head Stefan Löfven's role in pushing for the sale of Swedish Jas fighter planes to South Africa in 1999 when he headed the IF Metall union, a deal which many South Africa criticized for diverting resources away from the fight against Aids.

However, Lindén continues by pointing out that having reservations about trade sanctions against apartheid South Africa "is not the same thing as supporting it" and that since neither the head of Metall or the Moderates in the 1980s supported apartheid "there's nothing to apologize for".