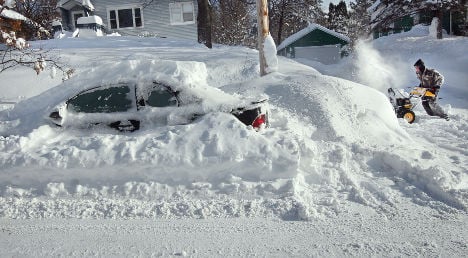 A snowed-in car. Photo: AP
"Stockholm is as a modern city and needs a modern way of ploughing," Stockholm's shadow city commissioner Daniel Helldén of the Green Party told The Local.
"We need access for everyone in the city, today it's mostly men who are prioritized when it comes to snow ploughing. What we want is a more gender equal ploughing system."
Inspired by authorities in the municipality of Karlskoga, Helldén explained that snowploughs in Stockholm typically target areas frequented by men, such as the roads, rather than entries to day cares, footpaths, and cycle paths, which are more often used by women.
In Karlskoga, central Sweden, the local government last year shifted the priorities of its snow removal practices to put more emphasis on areas often frequented by women. The move didn't incur any extra cost and has produced promising results.
In the municipality's old system, key roads were cleared first, followed by areas where men typically worked such as construction areas, and lastly areas used by pedestrians and cyclists.
See a video of Karlskoga's changes (in Swedish)

Authorities explained that the system did not intentionally discriminate against anyone, rather that it was simply being carried out "as it always has been".

After review, Karlskoga prioritized day cares, where parents usually go first in the morning, followed by areas around the largest work places regardless of gender, followed by schools, and then the main roads. As a result, the municipality noted that it had become more accessible for everyone during and after snowfall, particularly children.
Stockholm's shadow city commissioner Helldén, who is also the vice chairman of the city's Traffic and Waste Management Committee, now wants a similar system in place in the capital, and will submit a detailed proposal on Thursday, although he is not certain of success.
"I hope we will get a majority, but I'm not so convinced it will happen. The parties ruling today mostly prioritize cars," he told The Local.
Statistics show that each winter in Sweden, there are three times as many people injured on footpaths than on roads – which in turn increases socio-economic costs, he noted.
If the proposal is successful Helldén anticipates the rest of the country will follow suit.
"I'm sure it will spread further. Stockholm as a big city can show the rest of the world how to do this, and lead by example."
Oliver Gee