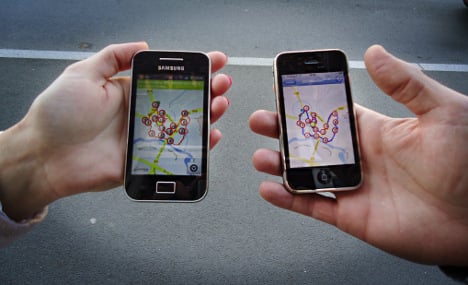 Mobile phone users in France. File photo: Pays de Montfort en Brocéliande/Flickr
Whopping roaming charges could be a thing of the past as Swedish telecom operator Comviq became the first company to launch an EU flat rate on Thursday.
"Our statistics show that seven out of ten Swedes turn their data roaming off completely while travelling," Magnus Larsson, head of Swedish mobile operator Comviq, told The Local. "They're afraid of using their phones abroad."
Ryan Heath, spokesman for the European Commission's digital commissioner Neelie Kroes, welcomed the move.

This seems to be a "roam like at home" EU-wide plan. Exactly what we hope all companies will offer! @euromec23 @swedroid

The European Commission has been trying to get the big operators to lower roaming costs. At several times the rate of domestic calls, many mobile users across the union have woken up to heavy phone bills upon returning home.
"As telecoms commissioner, I had to negotiate with the big – and exclusively male – telecoms chief executives about lowering roaming charges and mobile termination rates," another European commissioner, Vivian Reding, told the Financial Times in November.
The commission proposed earlier this autumn that mobile users pay no extra charge when receiving phone calls when abroad. While Comviq was first out of the barn door with a flat rate, the Wall Street Journal reported on Thursday that the commission had already praised Swedish operators TeliaSonera for slashing its prices. And while Comviq has made the move on its own, reports from Brussels suggest that the European Union will end up substantially lowering roaming charges, with an eye to potentially banning them union-wide altogether, despite industry opposition.
Comviq's new product, meanwhile, is the first out of Europe to offer a flat-rate subscription that allows customers to call, text and surf the web at a low price, regardless of roaming, anywhere inside the EU.
Larsson said the new service was essential to Comviq's customers, due to more frequent trips to other union countries. There was also the foreign-born customer segment in Sweden to account for.
"There are 500,000 people living in Sweden who were born in another European country. This shows the potential of people travelling to visit family and making calls back home, and using the internet while they're away," he said.