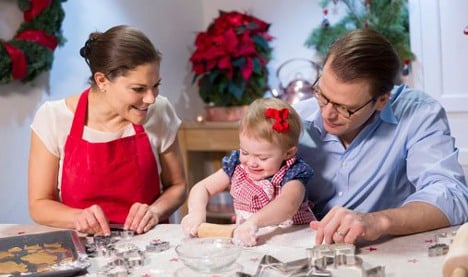 The film was recorded at the Haga Palace in Stockholm and was released on Friday. Within hours of its release, it had been generated more than 20,000 likes and been shared more than 900 times on Facebook.

In the video, the family sits together at a kitchen table making gingerbread cookies.

Princess Estelle, who is turning two in February, shows off her knowledge of animal sounds as her parents lead her through a royal gingerbread tutorial.

Click here to see more pictures from the day, and watch the full video below.

The video is reminiscent of another royal family holiday video recorded nearly 30 years ago at Drottningholm Palace featuring a young Victoria, as well as her siblings Prince Carl Philip and Princess Madeleine stuffing sausages with their parents.

The clip (see below), came to be known colloquially as the "more meat" (Mera kött) video, as the young princesses forcefully instruct their father and brother to add more mince to the sausage machine.