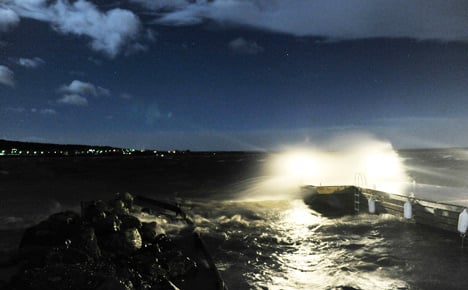 The winds damaged roofs, forced police to close off roads and the Höga Kusten bridge, while one man was taken to hospital with serious damage to his torso after a tree fell on top of him. The hospital in Öresund said the man's injuries were serious but not life-threatening.

By morning, about 55,000 homes were without electricity in the county of Norrland. Customers of energy companies Eon, Härjeåns Nät, Fortum, and Jämtkraft have all been affected, including several schools and pre-schools in and around Ånge and Fränsta. Pupils will be allowed to return by Monday.

Police in the town of Östersund counted at least a hundred incidents related to the storm.

"There was a lot of pressure for a while," duty officer Hans Ängquist told the TT news agency. He said that by 2am the storm had abated and the police returned to regular duties.

A spokesman for Västernorrland regional police said residents were well prepared for the storm, but it had nonetheless caused a lot of damage to powerlines, roofs, and cars.

Energy company Eon has sent out a shoal of workers to repair the damaged power lines.

"In total, we have 300 people who are either out there now or going out tomorrow," Eon spokeswoman Louise Gudmundson told TT.