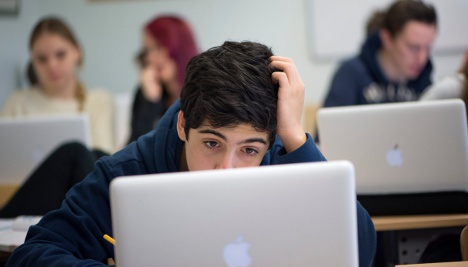 Pupils at work by their computers. File photo: Fredrik Sandberg/TT

"The problem with Ask.fm is the anonymity," said 15-year-old student Fanny Landström, referring to the site allowing members to hide their identities.

"So it could be someone I don't know who is writing this, but it could also be someone in my class at school," she told the Aftonbladet newspaper.

She said abuse was mostly sexual in nature, but also took aim at her appearance.

"There were a lot of hate-filled comments," she said.

Some months ago, staff at her school noticed that there were debates about Ask.fm in the foreign press. One of Landström's teacher decided to create a profile on the site and said he was shocked at the coarseness of the students' language. Jens Lindgren sent a note off to the municipality and also helped write a guide to parents about how teenagers today use the internet.

Lindgren and Landström welcomed Luleå munipality's move to block access to Ask.fm from computers in the schools.

The site, which allows users to ask one another questions with the option of anonymity, was launched in 2010 and boasts 80 million members.