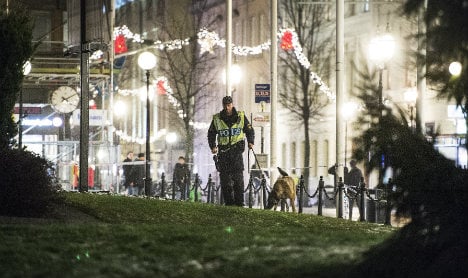 Photo: TT
The man, who is reported to be in his twenties, was shot in the torso on Drottninggatan in Örebro’s main shopping area on Saturday afternoon, according to a report in the local Nerikes Allehanda daily.
According to the police the man is connected to a gang known as Romanos and it is thought that the assailant is from rival gang Black Cobra.
“This afternoon at 3.26 police received the alarm about a shooting on Drottninggatan in central Örebro. It turned out that a young man who is a member of one of the two criminal gangs fighting each other in Örebro over last few weeks been shot down and injured and taken to hospital,” said Mars Nylén at Örebro police.
The hunt continues for the gunman and police have conducted interviews with witnesses on Saturday.
The man underwent an operation during the night and according to a statement from Örebro University Hospital his injuries are considered serious but not life-threatening.
Nylén indicated that the attack could be revenge for a shooting last Sunday.
The two rival gangs have clashed in recent weeks after Romanos rented a property in the city and began attempting to establish themselves. Black Cobra have in turn resisted the attempts.