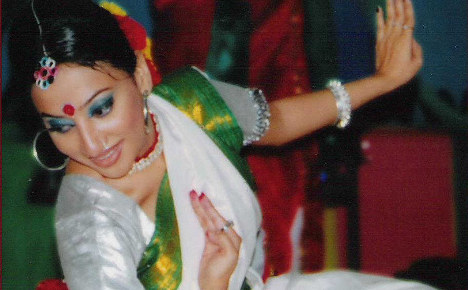 Wahida Zennath is a professional teacher and performer of Bengali and Indian dance. Photo: Private

Wahida Zennath began dancing when she was five years old, and has been a professional dancer in Bangladesh and India for many years. She won multiple awards and was known for her creativity and grace. She would need both those qualities when all of a sudden she found a husband, and his career took her to the other side of the planet.

“We met in Bangladesh three years ago for about five minutes, and then we got married,” Zennath recalls with a smile. “It was a normal marriage, not a love marriage.”

So there it was. In the middle of summer three years ago, she got her first glimpse of Stockholm from an airplane window. The transition wasn’t easy. Zennath’s husband Tariq works for an embassy in Stockholm, and as such the family is not eligible for free Swedish For Immigrants (SFI) language courses. She ended up paying for Swedish lessons but they were expensive and short-lived.

“I need more time, and I need to speak with people. I understand Swedish, and it’s getting easier, but I’m quite shy,” she smiles.

The Stockholm housing market was also its usual nightmarish self.

"We’ve moved apartments eight times in three years. You really need to start looking for a place even before you arrive in Sweden.”

Other than that, the biggest challenge was simply having enough to do.

“In Bangladesh we have six seasons, and a festival for each season, and I danced at all of them. Sometimes I would have three full programmes a day on TV (in Bangladesh),” Zennath remarks. “But here I was just sitting around.”

It simply would not do. So Zennath opened her dance school, Wahida’s Indian Dance School, in 2011, offering classes in classical and modern Bengali and Indian dances, folk and tribal dance, and Bollywood. Most Swedes, however, choose Bollywood.

“Most of the people here don’t know about Bengali culture, although the Bengali community is already more than 12,000 and growing here,” her husband interjects. “There are plenty of Indian restaurants – many run by Bengalis – and Bollywood dance is the focus. But the Bengali culture is different. And (my wife) can introduce people to it.”

“It’s very difficult to introduce people to my country and my dance, since they are unfamiliar with the culture,” Zennath explains. “It hasn’t been as big in media, and like ballet, for many it has to be explained."

In the three years since Zennath opened her dance school, things have improved. She performs regularly at various cultural events at universities and embassies, although making the right media connections is still a struggle.

“Wahida is fighting for her career here, a new career,” her husband says. “She takes all the burden herself, and she gets discouraged sometimes. It’s hard to find the proper channels to open and promote a school.”

One of Zennath’s biggest performances of the year is every December 16th, the Bangladesh Day of Victory. A celebration is held at the embassy, where Zennath tells her country’s struggle for independence through her dance.

“Bengali dance is like painting,” Zennath says. “We talk about freedom, fighting for our country, our struggle for our rights. . . and I express that through our dance.”

Currently, Zennath offers primarily Bollywood courses for those with little to no dance experience. Zennath’s ultimate goal, however, is to open a permanent dance institution in Sweden, with different styles of dance and professional teachers. At the moment, she rents studio space to welcome her pupils. A future school would be a platform for cultural dance, with workshops and courses in all styles.

Adapting her dance to a new Swedish setting has not proved a problem so far.

"Bengali dance is like acting. Snake charming, catching fish – you have to experience it. Although in Sweden, I now dance with plastic snakes,” she adds with a grin.