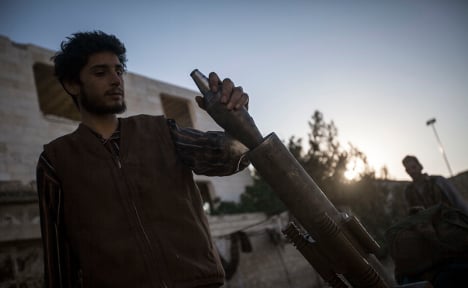 A Syrian rebel, unrelated to the article, in Idlib province. File photo: AP/TT

The Swedish intelligence service Säpo on Monday released several key figures from the past year that testified to an increase in the number of persons commuting between Sweden and the bitter Syrian civil war, where numerous factions are fighting for power. In its last annual report, published in March, Säpo researchers said about 30 Swedes had made the trip south. That figure has now more than doubled.

There could also be several unconfirmed cases of militants-in-training, but the agency said it would not release the number of individuals it was looking into.

"When we talk numbers we are talking confirmed reports. There could be more, but we won't go public with that yet," Säpo chief Anders Thornberg told the TT news agency, but underlined the confirmed upswing was significant.

"It's a considerable increase and it has taken place over a short period of time."

The number of individuals who have travelled to Syria to fight with groups that do not have ties to fundamentalist organizations was not made public on Monday.

The security agency said that overall, it was concerned about those who have made the trip because they could, upon their return, end up posing a domestic threat. The individuals have not only learned the know-how of terrorism while abroad, but could act as inspiration for others flirting with more fundamentalist tendencies.

The official estimate of how many people in Sweden support violent extremism in the name of Islam is about 200. That number could swell as Syrian civil war veterans return home to Sweden, Säpo cautioned.

To counteract against any future threat, Sweden has set up a taskforce headed by experts from  the Swedish Crime Prevention Council (Brottsförebyggande rådet – Brå). The investigation will collate Swedish and international research on violent extremism. It will also have a website with information about the various groups such as their ideology and their connections to terrorist acts.

The investigation was welcomed by Sweden's EU Minister Birgitta Ohlsson.

"These forces risk undermining our democracy," she said.

Certain commenters, however, have said the investigation took too wide a scope, aiming at all types of extremism rather than looking at specific threats tied to terrorist using Islam to justify their terror activity. Ohlsson defended the decision to look more widely, saying a narrower scope had its problems.

"Some countries have focused on certain extremism, particularly Islamist. We have not wanted to fall into that trap. It is important to say that we are obviously working on ways to counteract different types of extremism," Ohlsson said.