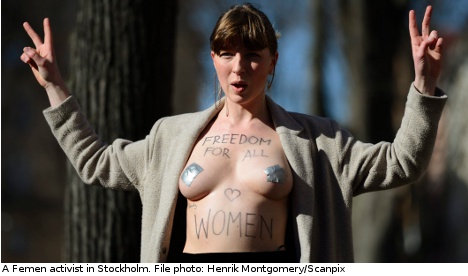 The Femen activists targeted the embassy in August during the capital's Gay Pride festival. Police were called to the scene and detained the pair, who attempted to break in and enter the embassy compound where they chanted "Gay rights are human rights" in support of the rights of lesbian, gay, bisexual, and trans (LGBT) persons.

The women, one of whom is Swedish and the other is Eqyptian, also staged a similar protest outside the Stockholm mosque in June. On that occasion, the bare-chested feminists chanted "no sharia" and "free women" and were later charged with disorderly conduct.

Official documents submitted to the courts system stated that the two women "without authorization penetrated and remained at the Russian embassy's fenced-off enclosure".

A spokesperson for Sweden's Feminist Initiative (Feministiskt initiativ – Fi) political party told The Local that the actions taken by the Femen protesters may not have suitable in order to get their message across.

"I'm not sure if Sweden's Femen protest is the way to go. We in Feminist Initiative have other ways to protest," Stina Svensson told The Local. "We in Fi see that political change is needed both in Sweden and also in the EU. We see that conservative and fascist parties have politics that wants to restrict human rights. Feminism is needed in political parliaments."

Svensson nonetheless said the Femen embassy protest was for a worthy cause. "LGBT rights are restricted in many countries around the world," she said. "Russia is not alone with its persecution, threats, torture and murder of LGBT people. When countries ignore human rights there should be protests."

In addition to the Femen protest, there were a number of other incidents at the Russian embassy during Pride week. The zebra crossing outside the embassy was painted in the colours of the rainbow and gay rights protesters were angered after the Russian embassy declined to fly the rainbow flag to coincide with Stockholm Pride, when even the city's public-transport buses sport the LGBT-rights flag.

Femen is originally a Ukrainian women's group that applies "sextremism" to draw attention to equality and democracy issues.

The activists have gained notoriety in recent years for staging topless protests at the Euro 2012 football tournament in Poland and Ukraine against sex trafficking, and prompted outrage for baring all to bid 'adieu' to Pope Benedict at the Notre Dame cathedral in Paris.

In Sweden, the activist movement has staged several protests including one at the central Stockholm mosque and gained headlines when they stripped off at an appeals court in the capital when six teenage boys were acquitted of gang rape.

LGBT
In Pictures: Tens of thousands turn out for Stockholm Pride parade
Url copied to clipboard!