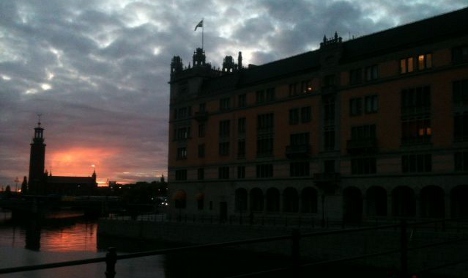 Stockholmers woke up to news on Tuesday that the Riksbank had lowered the repo rate.

"Economic activity is developing largely as the Riksbank had forecast earlier," the central bank said in an official statement. "However, inflation has been unexpectedly low and, despite the recovery, inflationary pressures over the coming year are expected to be much lower than in the most recent forecast in October."

The Riskbank aims to keep Sweden to a two-percent inflation target. The system has its critics, with the minority Left Party taking to the debate pages of business daily Dagens Industri on Tuesday to argue that parliament needed more say over how the bank ran its affairs.

"Slow increases in the repo rate are not expected to begin until the start of 2015," the Riskbank stated. "The risks linked to high household indebtedness remain, but the low inflation rate justifies cutting the repo rate."

Private finance experts reacted to the news on Tuesday morning, with Christina Söderberg Compricer savings expert telling the Aftonbladet newspaper that the news offered Swedish home owners a perfect opportunity to negotiate their mortgage interest rates with their lenders.

"Go to several banks and play their offers against each other," Söderberg said.

House-hold indebtedness remains a key concern of the Riksbank.

For some time now, monetary policy has involved balancing how low the repo rate needs to be for inflation to approach the target soon enough against the increased risks linked to households’ high indebtedness that can stem from a low interest rate," the bank noted.

"Inflation has been low for a long time, and the unexpectedly low outcomes in recent months regarding in particular service prices imply that it may take longer than anticipated for inflation to rise. Without a more expansionary monetary policy, there is a risk that inflation would not reach 2 percent in the coming years, and there is thus good reason to cut the repo rate by 0.25 percentage points and to adjust the repo-rate path downwards. At the same time, households' high indebtedness remains a risk to sustainable long-run development. Several policy areas need to cooperate to manage these risks. Growth in Sweden will pick up next year."

Reflecting on the greater global mood, the Riksbank noted that economic recovery in the US was on "increasingly firm ground", and it said the euro zone recovery, albeit slow, was on the right track.

"The recovery abroad is important to the Swedish economy, which after almost a year of weak growth is now moving towards better times," the bank noted. "The labour market has improved and confidence in the Swedish household and corporate sectors has continued to rise. Together with increasing demand from abroad, this means that growth will pick up next year."

The bank's executive committee board had disagreed about the interest rate, with certain members saying the repo rate should have been lowered earlier to ward off unemployment. The health of the labour market was also addressed in Tuesday's statement.

"The demand for labour should therefore increase further and unemployment should fall more tangibly," the authors wrote.

"The Riksbank's expansionary monetary policy will contribute to an increase in resource utilisation in the economy. Wages are then expected to rise at a faster pace, at the same time as companies can gradually raise their prices. As global economic activity improves, import prices will also increase."