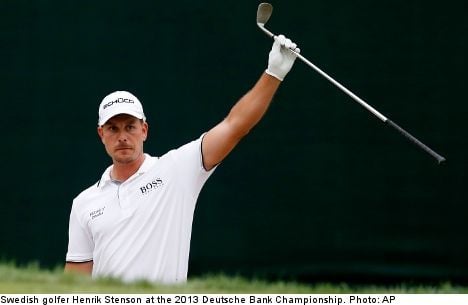 The 37-year-old, the first man from his country to win the award, made history this year by winning both the FedEx Cup and The Race to Dubai — the order of merit competitions in the United States and Europe.

"It's a big honour to be voted the European Tour Golfer of the Year," Stenson said. "It just reflects the stellar year I have had. You can call it a dream season, year of my life, whatever you want. It has been an unbelievable year and I am delighted to win this award, especially as I am the first Swede to do so."

Stenson won his first European tour title in 2001, but he had to go through two career slumps — the latter of which, in 2011, left him ranked 230th in the world — before bouncing back in style.

His other stand-out performances in 2013 included a share of third place at the Scottish Open, followed by runners-up finishes at The Open and the WGC Bridgestone Invitational and third place in the US PGA Championship in the space of just five weeks.

He then won the second FedEx Cup play-off event, the Deutsche Bank Championship, before triumphing in the Tour Championship in Atlanta to seal the overall title and a $10 million (7.3 million euros) bonus.

Though plagued by a wrist injury, he played in all four tournaments in the European Tour's inaugural Final Series, surging to a six-shot victory in Dubai with a tournament-record score of 25 under par.

"I'm not sure how I top it, to be honest," added Stenson, who is the current world number three. "I am not sure many people will get the chance to do what I did this year, but I just need to keep working hard and pushing forward."

"The majors are the biggest goal for me now and if I can continue to play at the level I have been then I feel I can have a pretty good shot at them."

European Tour chief executive George O'Grady said: "There is absolutely no doubt that Henrik Stenson is a fully deserving winner of the Race to Dubai European Tour golfer of the year award.

"Henrik's unprecedented success was the result of the most tremendous consistency and hard work, and to finish it all off in such style at the DP World Tour Championship to secure The Race to Dubai was quite remarkable."