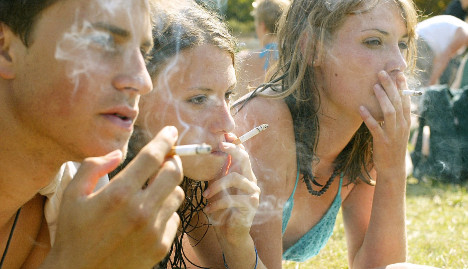 "We expected to see some changes in the DNA, but I was surprised that they were so dramatic," Åsa Johansson, lead researcher on the project at Uppsala University, told The Local. "It’s very hard to measure and give consistent numbers, I can’t really say, but we do see changes of maybe 20 percent (in risk rates) in certain genes."

The Uppsala study indicated that smoking-related conditions such as cancer, diabetes, reduced immune system defences and lower sperm counts are far from temporary and may in fact even affect future generations.

Genes are inherited but can be altered throughout life by chemical exposure which affects their activity, known as epigenetic modifications. Such modifications occur naturally with ageing but are also affected by lifestyle and environmental factors.

"On the DNA there are various molecules which bond to the DNA and regulate its activity," Johansson explained.
"When you smoke you are exposed to certain toxins which cause molecules which change DNA behaviour. And the same genes that we see changing in smokers are those genes which other studies have suggested are involved in developing cancer, diabetes, etc."
The study was carried out by the Department of Immunology, Genetics and Pathology at Uppsala University and the Uppsala Clinical Research Center in eastern Sweden. The study examined the genetic impact of smoked tobacco as well as smokeless tobacco, a popular substance in Sweden known as snus.

Interestingly, while the researchers were able to identify many genes altered by smoking tobacco, the effects were not mirrored in smokeless tobacco. Johansson pointed out a couple of possible reasons for the discrepancy.

"The epigenetic modifications may not be caused by the actual tobacco, but by different elements created when it is burnt. Many of the changes may also be due to toxic substances added in production, not the tobacco itself," she said.

Johansson said current research had been unable to determine whether or not the genetic modifications caused by smoking tobacco are carried on to the next generation, but it is very possible.

"As far as we know right now there is no direct mechanism to transfer this," Johansson told The Local. "The studies have not proven that (direct effect) in humans. But similar animal studies done previously suggest that it can."