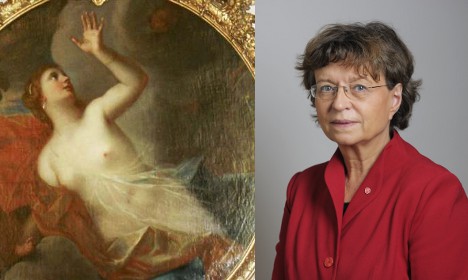 The offending image and Social Democrat Susanne Eberstein. Photos: Christina Wohlfahrt Leffler/Riksdagen; Henrik Montgomery/TT
The nude named Juno, painted by baroque artist G E Schröder, had hung in the guest dining room for some 30 years before deputy speaker Susanne Eberstein decided enough was enough.
Eberstein's will was the janitor's command and one day Juno was gone, and the flaunted flesh beamed down no more on visitors to Sweden's national assembly.
The artistic omission did not go unnoticed however and when news agency TT began to ask questions of the Riksdag administration department reactions were characterized mostly by embarrassed giggling.
"We routinely change paintings from time to time," was the belated official response.
As Schröder's Juno had been decorating the dining room since 1983, the response seemed a feasible one, but it soon emerged that the removal had other motivations.
The dining room in question is used for official meals with foreign dignitaries, and according to one of the other parliamentary speakers – who preferred to remain anonymous – a defrocked woman on the wall had become a sensitive matter.
"You have to think of the foreign guests, especially those from Muslim countries," the source explained.
But after a little more digging it emerged that the concerns of foreign dignitaries were a secondary consideration and the fate of Juno had in fact been sealed by a more domestic concern.
"I think it is more a feminist issue. It's tiresome (looking at) a bare-breasted woman when I sit at public dinners with foreign guests. I think it feels a little hard to sit there with men who look at us women," Social Democrat Susanne Eberstein explained.