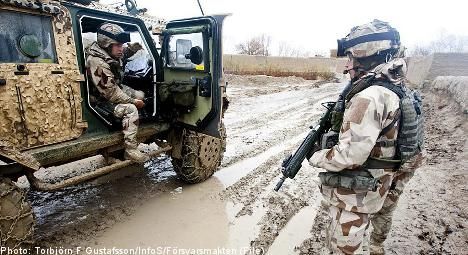 "We are pleased that the cooperation with the Armed Forces mean that the first of the interpreters and their families now find themselves in safety and security on Swedish soil," Migration Board (Migrationsverket) head of operations Mikael Ribbenvik said in an official statement.

Sveriges Radio reported on Friday that neither the Armed Forces (Försvarsmakten) nor the Migration Board would go into details about how many of the locally employed staff had been given the right to stay in Sweden for humanitarian reasons.

The interpreters have several times gone public with their fears that they become the target of reprisals once the Swedish soldiers leave the Central Asian country. Troop pull-outs are scheduled for 2014, although the foreign minister has said he would like to keep some 200 soldiers on the ground.

Not taking care of the local staff would endanger Sweden's future international missions, the armed forces have warned.

"In an environment like this the interpreter is an absolutely vital part of the operation… If we going to be able to work and recruit in the future, in whichever country, interpreters must feel that we take care of them," Sweden's Supreme Commander Sverker Göransson told the Dagens Nyheter (DN) daily earlier this year, when the issue of the interpreters' safety arose.

Some 24 Afghan interpreters working with the Nato-led but UN-mandated International Security Assistance Force (Isaf) applied for asylum in Sweden in the summer of 2012 but were told that applications must be made individually and in Sweden.

While authorities remained mum about the number of Afghan staff welcomed in Sweden, Afghan operation commaner Anders Silwer said that Sweden's Armed Forces had looked at the individual cases for asylum.
"Our judgments are always based on the individual, and (that person's) needs," Silwer said in a statement.