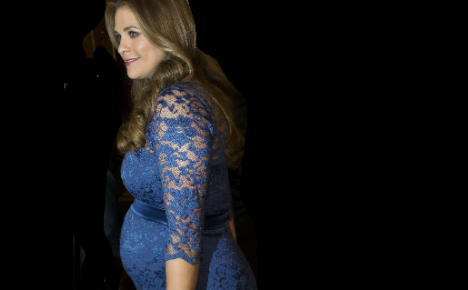 A pregnant Princess Madeleine. File: TT (This image has been altered to remove Prince Carl Philip)

The birth of Princess Adele

Oh we do like Maddie, don't we? Miss Party Princess turned Mrs Hedge Fund. She didn't make it to this year's Nobel banquet. Unfortunately, as we for real missed her voluminous hair and ample… hm… sorry, but if you wore that dress with that cleavage you'll always be known as the Nobel Nymph. Even if it was eleven years ago.

This year Princess Madeleine was AWOL, as she had her quite possibly swollen feet up on the coffee table at home in New York – she's preggers, as you all know.

Which brings us to a pretty safe prediction. Sweden will get mini-princess number two next year. (We say princess because Madeleine reportedly ticked the pink box on an American baby apparel site). In the meantime, flick through some galleries of Princess Estelle.

Well, sing-along to this then you boring old fogey critics… The Local predicts that the glam princess will go all James Bond "Skyfall" on us all and nick the name of the theme-tune singer….

Tune in tomorrow for the next prediction.