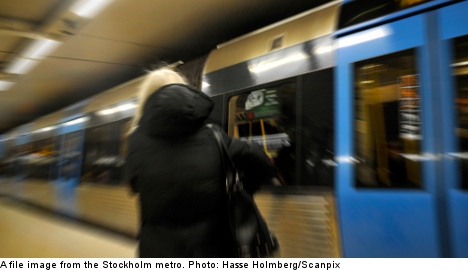 A Christmas guardian angel intervened after the man wandered onto the tracks at Sandsborg station in the south of the capital in the early hours of Saturday morning. He was spotted by the driver but it was too late as he was ran over by the train with authorities fearing the worst.

Rescue services were sent to the scene and worked to remove the man from the tracks. He was found alive with barely a trace of the collision on his body which emerged unscathed.

Local authorities confirmed that the man was found in a severely drunk state with precious little recollection of his brush with death.

"The man didn't remember how he ended up there but he got an abrupt awakening when he was rescued from the track. It really is a story with a happy ending," said Matti Dordlofva of the Stockholm police to Dagens Nyheter.

Following his dramatic rescue the man was taken to hospital to be examined where he was given a clean bill of health.

"When we spoke to him he remembered nothing. He was very lucky," said Mats Almquist of the Stockholm police to Aftonbladet.

Police are currently investigating video camera footage to determine how the man ended up the tracks in the first place. A criminal motive has not yet been ruled out.