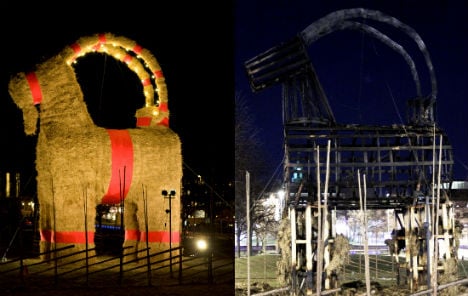 Gävle's 2013 Christmas goat pictured before and after its arson attack. Photo: TT Nyhetsbyrån

The massive straw goat, which this year had been beefed up with flame retardant liquid, has long been a target for arsonists since the first one was erected in the central Swedish city in 1966.

Police authorities were alerted at 4am that the 13-metre tall Gävle goat (Gävlebocken) was on fire and emergency services were quickly on the scene.

"We are out looking with patrols and as usual keeping an open mind on this matter," Fredrik Nilsson of the Gävle police told Aftonbladet.

He added to the TT news agency; "I have a hard time believing that it may have started because of natural causes."

In November officials in Gävle were confident the 2013 vintage would stand a chance of surviving through the holiday season telling The Local that it "should be much harder to burn down."

I'm so sad my friends that I have to leave you now! Thank you for this year! Take care and have a Merry Christmas and a happy new year!

However, such optimism proved unfounded with the latest arson attack leaving members of the local goat committee dismayed.

"We are really sorry. We are supposed to celebrate Christmas and New Year with the goat in place. We are very sorry that it can't be just left be," said Maria Nässert, spokesperson for the goat committee in Gävle to TT.

The goat has made headlines in the past after Swedes tried to kidnap the structure by helicopter and after some youths got suspicious goat tattoos shortly after it burned down last year. Once, an American tourist was convicted of arson after he burned it to the ground, thinking it was a harmless tradition and not realizing such an act was indeed against the law.

Indeed, the goat has been burned to the ground more often than it has been left standing. It was first torched in 1969 while the class of 1977 only got to bleat for six hours.

The goat, which has its own Twitter account, posted a message on Friday saying it felt "confident" and was "longing for Christmas.

After it was set ablaze the goat took to the social media network to express its sorrow but did keep the Yuletide spirit alive by wishing its thousands of followers a happy Christmas.

"I'm so sad my friends that I have to leave you now! Thank you for this year! Take care and have a Merry Christmas and a happy new year!" posted the Gävlebocken.

Local media reported that the goat has been set ablaze at least 24 times since the first one was put on display back in 1966.