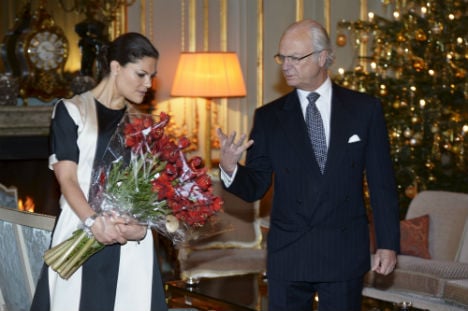 The poll, which was published in Swedish daily Dagens Nyheter, found that 48 percent of those surveyed wanted the King to abdicate. King Carl XVI Gustaf was backed to remain in his current role by 39 percent of those who participated in the DN/Ipson poll.

A polling expert with Ipsos said the figures may reflect some "dissatisfaction" with the King's work while his age may also count against him. The Swedish monarch recently turned 67 and has been on the throne since 1973.

"As the King gets older and Victoria grows in experience then the accession of a new monarch becomes more natural and obvious," said Johanna Laurin Gulled of Ipsos to DN.

Support for the King has declined since the last survey was carried out in 2011. On that occasion 41 percent wanted him to hand over to Crown Princess Victoria with 44 percent arguing he should stay where he is.

Despite recent public fervour over the Royal weddings of the King's daughters Victoria and Madeleine plus the arrival of Princess Estelle it seems that support for the monarchy continues to drop.

Some 64 percent of those surveyed want the monarchy to be retained compared to 80 percent asked the same question back in 2005. Those who want the royal institution to be scrapped altogether in favour of a republic has increased to 27 percent, a rise of six percentage points since 2011.

"We can see that the percentage of voters who want to keep the monarchy has steadily declined since the first survey in 2005," said Laurin Gulled.

However, the majority of Swedes want to keep the royal family in place at least for now. Pollsters said the figures from 2011 were likely influenced by negative headlines surrounding the King but that wasn't the case with the latest survey.

"Now there is no similar incident which could have influenced the support for the monarchy," added Laurin Gulled.

She also said that there was a "clear age difference" when it came to the disparity between how young and old people perceived the monarchy with more young people having a lower opinion of the royal estate than their elders.