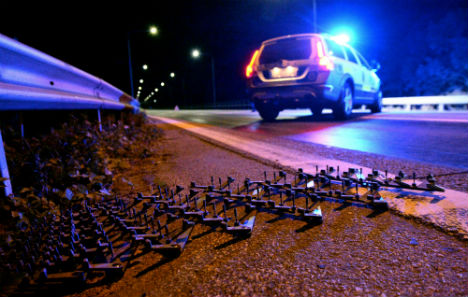 The gaffe took place just outside Landskrona in Skåne when police were in hot pursuit of a driver who didn't have a licence. In order to slow down and grab their target police had put out a spike mat – a mini bed of nails – on the road to bring the vehicle to a halt.

However, the cops' attempt to nail the unlicensed driver was punctured when one of their own officers ran across the spike mat instead.

"The plan was to use the spike mat to stop the vehicle but unfortunately it was one of our own cars which ran over it," said Marie Persson of the Skåne police to local paper Sydsvenskan.

As a result the driver being chased was able to make an escape while the police car suffered a puncture and had to be towed from the scene.

The chase, which got under way just after midnight, lasted less than ten minutes. Police recognised the car and said that the person who normally drives it doesn't have a licence and set off in pursuit.

Police added that they were not going to write up a report as nobody was able to confirm if the person driving the car was the suspect they had set off in chase of.