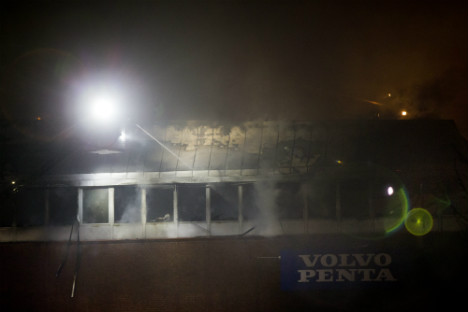 No injuries were reported following the blaze at the Volvo Penta facility which took fire services several hours to bring the flames under control.

"It didn't burn the entire facility but the whole plant has been affected by smoke," said Bosse Andersson of the emergency services in greater Gothenburg to the TT news agency.

The police added that three people were in the factory when the fire started but subsequently disappeared when the alarm was raised. For investigative reasons the incident is currently classified as arson.

Fire-fighters were forced to take a step back from quelling the flames when an attempt to remove a section of the roof with a crane failed.

"The roof collapsed and folded like a lid," said Joakim Hallin of the local emergency services.

Rescue services eventually brought the blaze under control and are expected to maintain a presence at the facility throughout Sunday.

Police have cordoned off the area around the plant to conduct a technical examination of the scene but are unclear why the blaze occurred.

"We really don't have any notion as to what started the fire as things are at present," said Peter Adlersson of the Västra Götaland police.

The whereabouts of the three people who fled the scene is currently unknown.