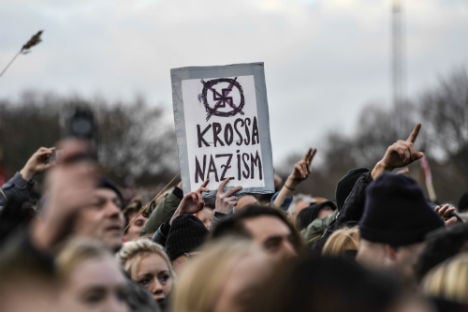 The rally was held in Kärrtorp in the south of capital with numbers swelled by last week's violence after a similar rally in the same place was marred by ugly scenes instigated by neo-Nazis.

Swedish Television (SVT) reported that as many as 16,000 showed up chanting 'no to racism' and to hear speeches from several organizers including members of the Left party.

"I'm here to show my support for common people, families with children and for the right to move about in your own neighbourhood," said Spanish tourist Efraim Olalla who attended the rally whilst in Sweden on holiday.

Police had earlier said they were taking "preventive measures" to ensure the rally took place without incident. Last week the police said they didn't have enough officers on the beat when the violence escalated which resulted in several arrests.

The police did add that the latest rally had not been the subject of any threats in advance of the march.

"It feels as though the square has been taken back. It shows that there are many of us who believe in democracy and non violence," said Left party leader Jonas Sjöstedt to the TT news agency.

The rally was organised by Line 17 group who held a brief press conference just before midday saying that Sunday's manifestation was more than just a protest against neo-Nazis but an overall rejection of racism as well as security.

"It is too easy to say 'F you all Nazis,' we must together look at ourselves and understand the power we have in this matter every day," said DJ pair Bianca and Tiffany Kronlöv in a short speech earlier in the day.

Similar protest marches were held elsewhere in Sweden on Sunday including Borås, Luleå, Malmö and Motala.

In a separate incident police evacuated a church in Stockholm on Sunday following a bomb threat. The church was inspected and no explosive devices were found.