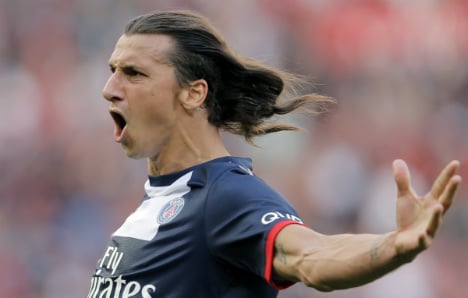 Zlatan will not win Ballon d'Or nor Uefa Champions League

After winning his 642nd Swedish Golden Balls (Guldbollen) award (not really, but he does have eight of them), Zlatan Ibrahimovic will likely dominate the sports headlines once again in 2014. As The Local Sweden's sports knowledge goes no further than reporter Ann Törnkvist's never-quite-happened volleyball career, editor David Landes' zamboni duties, and journalist Oliver Gee's occasional dust-ups on the pool table, Zlatan will probably also dominate The Local's "sports coverage". For ever.

Zlatan is up for the Fifa Ballon d'Or in January, which goes to the world's best player, but with competition from Lionel Messi and Cristiano Ronaldo it's one trophy that is unlikely to end up on his ever expanding mantelpiece.

A piece of silverware he does have his eye on is the Uefa Champions League, which the striker has never won.

Zlatan 'playing better than ever': Zlatan

Indeed, in football circles one quips that an équipe sans Zlat is the best way of boosting your chances of winning European football's top prize. Both Inter Milan and Barcelona won the Champions League the following season after off-loading the Malmö native.

Still, he always his own set of Swedish stamps to keep him busy when they are issued in March. Expect there to be a will he/won't he (again) saga over whether he will quit the national team (again) or hang around and try to qualify for Euro 2016 by which time he will have reached the ripe ol' age of 34.