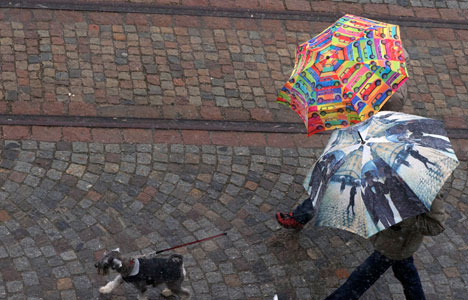 Most Swedes will get a wet and windy Christmas. File photo: TT

The wind and the rain are set to continue as Swedes wrap their gifts and write their Christmas rhymes – clues what the gift-wrap is hiding – and meteorologists at the state weather agency SMHI has now said temperatures will stay above normal for the time of year.

The north will keep its blanket of snow and areas will get a fresh dusting for Christmas, but anyone on the eastern coast or in central and southern Sweden can wrap up their white Christmas dreams and store them in a cupboard for next year.

The Scots are sending a Christmas gift Sweden's way in the guise of severe gusts, SMHI warned.

"An area of deep low pressure with its centre between Scotland and Iceland will mean that the entire country will be dominated by windy and wet weather with mild winds from the south and southwest," the meteorologist said in their prediction for Christmas Eve. The rain will continue on Christmas Day and Boxing Day.

Sweden's west coast could see temperatures reaching as high as the unseasonal 10C.

The odd weather could, however, pose its own dangers in areas where night temperatures risk dipping below freezing.

"The slippery surface can be treacherous," warned Trafikverket spokesman Jonas Bengtsson. "You should a bit more attention and take it easy. Even if a stretch of road looks nice and clear, it can be slippery."