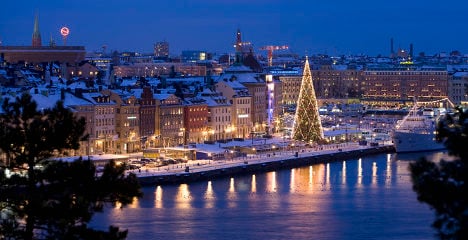 'Nu är det jul igen', they all sing – but what does it mean? (Well, directly translated, 'now it's Christmas again'.) From Advent to Lucia and finally to Christmas, December in Sweden is overflowing with festivities, odd and awesome alike. Let's begin.

The renowned Swedish tradition of the smörgåsbord julbord transforms at Christmas time into the Julbord – literally Christmas table. The julbord is essentially a buffet of bizarre and beautiful season Swedish delicacies. These include the basics like Swedish meatballs, but often also jellied pigs' feet, Vienna sausages (known as prinskorv, prince sausages in Swedish), gravadlax – raw salmon cured in dill and lemon, and a traditional dish called Jansson's Temptation – a creamy potato dish with anchovies. Pâtés of liver and seafood are also popular. If you're doing it properly, help yourself to cold dishes first, and then return for the warm food.

The julbord is, of course, accompanied by snaps and aqua vit – but not wine. While a small cup of glögg might be had before the buffet begins, wine with Christmas food is a rookie foreigner mistake. If you're puzzling over how to pronounce this one, just pretend you are chugging a delicious spiced drink which simply tastes like Christmas. One can say that 'glögg' is the sound you make as you gulp down another glass.

Bottles of glögg can be purchased in low and no-alcohol varieties at any food market during winter, though for the more full-bodied versions you'll have to head to liquor monopoly Systembolaget, but the drink can also be prepared at home. Glögg is made from red wine and spices such as cardamom, cloves, and cinnamon.

During the last couple of decades the Swedish Tomte has gone through a bit of an identity crisis. The jolly round man known as Santa Claus in the USA goes by this name in Sweden, but originally the Tomte was a gnome – a short, wrinkly-faced mischievous man with roots in Norse paganism.

The Tomte was said to live beneath the floorboards of houses or barns, and protected livestock. He is associated with another Swedish Christmas symbol, a goat (julbock). These days perhaps the most famous incarnation is the Gävle Goat, a giant straw goat which is frequently the victim of arson as Christmas approaches – just like this year.

Several traditional Swedish Christmas songs mention the tomte – including one little ditty the Swedes love to sing as a drinking song before a julbord, 'Hej Tomtegubbar'. Roughly translated the key phrase is 'Hey, jolly gnomes, fill your glasses and let's be merry together.' And if you're going to be in Sweden over Christmas, learn this song. It's simply easier that way. The Christmas tree itself is decorated, much like in many other parts of the world – but not. While many Swedes do use glass ball ornaments as well nowadays, most still use primarily traditional ornaments made of straw, in the shapes of stars, angels, pinecones, and goats. Gingerbread cookies and paper hearts also make appearances.

You thought your Swedish mates were going to put on 'It's a Wonderful Life' this Christmas? Think again. It's time for Donald Duck.

Disney's dorky and mildly devilish duck, known as Kalle Anka in Swedish, rules Christmas TV. Christmas celebrations are organised around the figure, we kid you not. Swedes adore the duck. The Disney Christmas special, 'From All of us to All of You', known in Swedish as Kalle Anka och hans vänner önskar God Jul ("Donald Duck and His Friends Wish You a Merry Christmas"), is shown at 3 pm every year on Christmas Eve.

While Donald gets all the credit, the show in fact features a whole range of classic Disney characters, from Snow White to Mickey Mouse, as well as the eponymous duck. The show was first aired in 1959, and it's been a tradition since. Each time the show, or even one portion of it has been threatened, the public response has been strong enough to restore it. In other words: It's an oldie, it's a goodie, and you can't touch it.

Another Christmas television favourite is 'Sagan om Karl-Bertil Jonssons Julafton' by Per Åhlin, from the short story by Tage Danielsson. Made in 1975, the animated movie follows a Robin Hood style theme where wealthy Stockholmers are robbed and the bounty given to the poor.

Another Christmas TV tradition dates back almost as far, to 1960. The Christmas Calendar, known until 1971 as the Advent Calendar, is a yearly TV series airing one episode each day in December, culminating on Christmas Eve. The show is always aired on Swedish Television (SVT) and has some connection to Christmas.

Devised by Harry and Robert Robberts in 1910 as an alcohol free alternative to beer, Julmust, which is somewhat like a super sweet, spicey rootbeer, makes up more than 75 percent of drink sales in December, by far outselling Coca Cola, which is usually the most popular drink.

The same drink is sold at Easter under a different name, påskmust, but otherwise is unavailable the rest of the year.