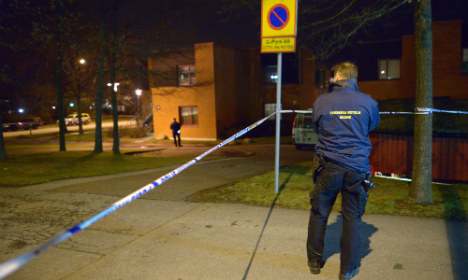 Photo: Johan Nilsson/TT
Police were alerted to the scene in the Norra Fäladen residential area in Lund at 22:40pm.
"We received the call that a man was shot and lay outdoors," said Marie Keismar, duty officer at Skåne police told the TT news agency.
The man was taken to hospital but his life could not be saved and he died of his wounds.
One person has been arrested and has been taken to the police station. The suspect was interviewed during the night, but police would not comment on what he said.
The man was arrested near the crime scene, shortly after the police arrived.
"A suspect was arrested without any drama shortly thereafter in the vicinity," said Calle Persson at Skåne police to TT.
According to a report in the Expressen daily, the victim sustained at least one shot to the chest. The newspaper also reported that a gun was found near the crime scene.