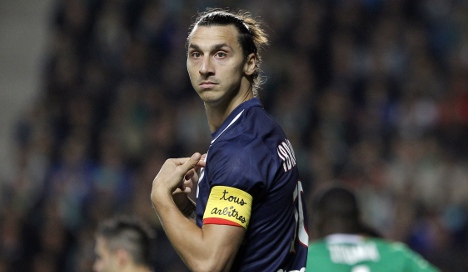 Zlatan Ibrahimovic in action for his club side Paris Saint-Germain. Photo: AP

The 32-year-old striker went on the offensive in a lengthy interview with Expressen where he sounded off on the respective merits of the male and female game.

"I was asked last summer who was the best, me or (Swedish ladies international) Lotta Schelin. You're kidding with me, right? You're joking with me. Do I have to answer that?," said the Paris Saint-Germain striker.

He added; "They compare with me with the world's best footballers in Europe…with Messi and Ronaldo…and when I get home they compare me with women's football. What the hell, should I feel ashamed to come home?" said the striker.

Ibrahimovic was prompted to speak out after the topic of 'cargate' was brought up. In November the Swedish football association was heavily criticized for awarding a new car to record caps winner Anders Svensson while Therese Sjögran, who holds the record for appearances for the ladies team, was overlooked entirely.

Sjögran was later given a car by Peugeot after saying it was a "joke" that she was overlooked.

He said; "The media put a black shadow over everything. He is better known for having been given a car than for breaking the record.

"Pay tribute to him instead for this record as he is one of the few players who has reached this level. It is better to stay on that line instead of devaluing him by comparing him with the ladies' individual achievements. They can get a bike with my autograph and then we are good," said Ibrahimovic.

Zlatan's words haven't gone down well with prominent professionals inside the ladies game. However, he did add in the interview that he did respect the womens team and said they had done "fantastically well."

"On one occasion he said we were fantastic and then he thinks that we should have a bike. I don't know what he is angry about really, if it is the association or the media," Therese Sjögran told Sydsvenskan.

The row has overshadowed Ibrahimovic's award for Sweden's most popular sportsman for the fifth year in a row. He received 58.7 percent of the vote in an Aftonbladet poll beating cross-county skiers Charlotte Kalla and Jonas Olsson in the process.

"It makes you feel alive," he told Aftonbladet.