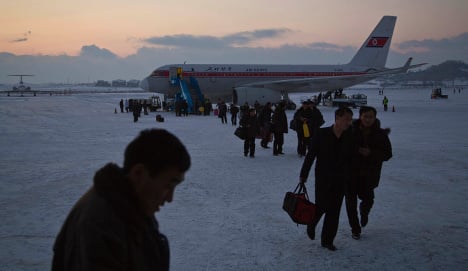 Pak Kwang-Chol, an associate of the young supremo's uncle and political regent Jang Song-Thaek, was seen returning home from the Swedish capital after making a brief stopover in Beijing. South Korea's Yonhap news agency cited a diplomatic source in Beijing who said that the envoy to Stockholm and his wife were escorted by North Korean officials onto a flight to Pyongyang.

It is not the first diplomatic recall believed to have ties to the biggest political upheaval since the young leader inherited power two years ago. North Korean recently executed Kim's uncle Jang Song-Thaek, whose a nephew Jang Yong-Chol was ambassador to Malaysia before being recalled earlier this month.

The envoy to Sweden, meanwhile, had spent just over a year in Stockholm before his recall.

At the time of his appointment in 2012, the Swedish foreign ministry described Pak, 57, as a career diplomat with eleven years senior experience in consular affairs who had worked for his country since 1989. He presented his credentials to Sweden's King Carl XVI Gustaf last October.

Sweden is an influential diplomatic player in the North Korean capital. Since the United States and North Korea have no diplomatic ties, the Swedish embassy in Pyongyang represents US interests in the country, with the Swedes acting as a kind of go-between.

There are growing concerns over the regime's stability after Jang's execution. Seoul and Washington have warned of possible provocative acts by the nuclear-armed North following the purge.