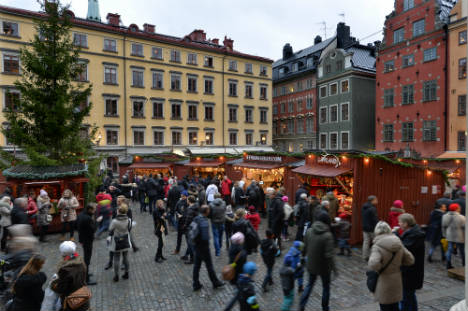 People living in the southern cities Malmö and Kristianstad enjoyed temperatures just over 10 degrees Celcius over Christmas. However, despite the warmer weather, no records were set with the landmark for the hottest Christmas remaining at the 13.7C set in Simrishamn, southern Sweden, back in 1977.

"Even if there was no record, the temperatures are unusually high this year, much higher than normal. It's above freezing in most of the country except for the mountains," said meteorologist Linnea Rehn of the Swedish weather agency SMHI.

The small village of Kvikkjokk in far northern Sweden had the coldest temperature clocking in at -26C. In the north, the weather fluctuated by as much as 20 degrees in large part caused by the switch between high and low pressure systems moving in over Sweden.

Friday is set to be rather cloudy with the chance of rain in the late afternoon coming in from the southwest.

Residents in Norrland can likely expect snow on Saturday, but the last weekend of the year is anticipated to be clear with cooler temperatures. Those living in Götaland, the southern parts of the country, can expect plus degrees.

"The mild weather will continue over the New Year with rain in the south and snow in the north with rain coming in from the coast," said Arvid Olsen of SMHI.