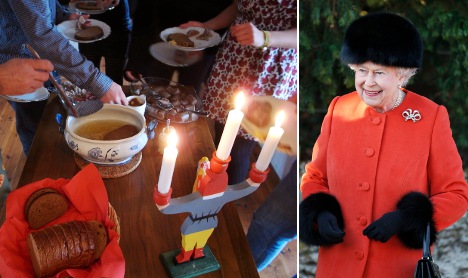 One of the most jarring aspects of any new immigrant's life is dealing with major public holidays that are celebrated in different ways than those we are accustomed to. And major public holidays don't come any bigger than Christmas, at least not in the Western hemisphere. Even those of us who try not to become set in our ways don't like too much change when it comes to Christmas – it often proves to be an anchor in a constantly fluid world.

Last Christmas was spent continuing to renovate our tatty old farmhouse in northern Sweden but this Christmas, six-month-old twins and all, we were invited to spend Julafton (Christmas Eve) with some of our new Swedish friends. Of course, given that the Swedes celebrate their Christmas on Julafton, we were able to have a traditional English Christmas the next day. How did they compare?

As a committed (some would say 'over committed') foodie, this was my main concern.

You see, I love turkey, sprouts, roast potatoes and all the other staples of the English Christmas dinner. And, as I have mentioned before, I'm not a great fan of the food of northern Sweden.

We arrived late (yes, as tardy English people we do fit most of the stereotypes attached to us by the Swedes) and were immediately faced with lunch. My friend, Rune, explained to me the traditional delicacy, blöta or dopp i grytan, which is old crispbread soaked in bacon water, then slathered in butter and covered with cooked ham and apple sauce. Sounds disgusting, right? Wrong – it was absolutely bloody delicious, the creaminess of the dunked bread/ham water/butter combo contrasting perfectly with the saltiness of the ham and the tartness of the apple sauce.

The same cannot be said for watery, tasteless (unless you tip a kilo of cinnamon on it) risgrynsgröt, the rice porridge served by our lovely hosts as an alternative to blöta. Yes, I know it's traditional. But so was slavery and dunking witches. It's like grits from the southern states of the US – wallpaper paste for the belly.

The julbord, however, the buffet of fish, meat and vegetable dishes that constitutes the main sustenance of Julafton, was simply sensational. Where else would you find such a variety of fantastic food? Spare ribs, gravad lax, chilli chicken thighs, pomegranate salad, salmon steaks…..I could go on but I'm making myself hungry again.

By contrast, although our traditional English Christmas dinner was tasty, with its juicy turkey, succulent pigs in blankets and crunchy roast potatoes, it felt just a little staid and fusty compared to its Swedish counterpart.

Although we're enduring an unseasonably warm winter up here, there was still just enough snow for us to be able to go for a sleigh ride after our Swedish Julafton food. That's right – a sleigh ride. After our English Christmas lunch we watched an old lady in a yellow dress waffle on for ten minutes about her great-grandson. OK, so it was the Queen's Speech but we may as well have been standing at a bus-stop listening to a pensioner prattle on about her bunions to anyone who would listen.

So, an early lead for the Swedes. But that was before the 3pm Kalle Anka and Friends Disney hour on Swedish television. Many of the clips are terrific, reminders of just how good the Disney studio was before it overloaded on saccharine. The stupendously violent Donald Duck clip, for example, is genius. But – and you knew there was a 'but' coming – the Jungle Book clip is, essentially, criminal. How on earth can you justify dubbing The Bare Necessities into Swedish? The song no longer makes sense.

Most of that great song's rhythm comes from the words – without them, it just plods along. And those awful, awful voice actors. Shere Khan sounds exactly like Baloo – that's just wrong. I voiced these concerns, rather robustly, and was greeted with blank stares by my friends and their family. This mediocre abomination is what they've become used to. Gasp! They may not have even seen or heard the original. Never mind the Thomas Quick farrago, this is the real national scandal.

An honourable draw. We're very lucky that we can dip into Swedish Jul (and enjoy the fantastic julbord) and luckier still to have the luxury of a traditional Christmas Day as a back-up. Just keep me away from Kalle Anka and all will be well.

Have a great new year!