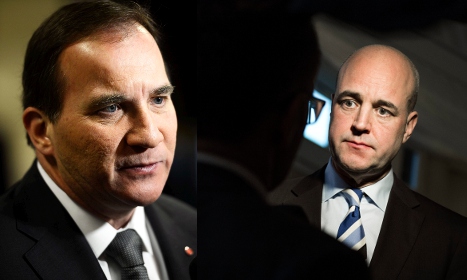 Swedish politicians have already become uncharacteristically grumpy and theatrical (some would say rude) and with no one party set for a majority, there could be some seriously odd coalition-building come September. But first, let's look back.

It was a breath of fresh air when the Alliance took power in 2006 – that's a four-party conservative coalition, not an episode of Star Wars. It held onto power in 2010. Next year, however, is a different kettle of fish entirely. What do the Swedes want?

The issues facing Sweden at home also plague Europe. Almost one in four of Europeans who are younger than 24 are not working. Sweden fares a bit better than its neighbours – at 22.8 percent, according to a European parliament estimate, compared to the EU average of 23.3 percent – while Spain, Croatia, and Greece are in the doldrums. Half of their youngsters can't find work.

Which brings us to a rather ridiculous Catch 22 – conservatives are seen as good custodians of the economy, while socialists "understand" industry and labour… in essence, these are two sides of the same coin, but sum up a generalized view of the right-left divide and who's good at doing what.

While Prime Minister Fredrik Reinfeldt has spent the past seven years on a slaughter rampage of "holy cows" (The Economist's words, not ours), letting the free market into dusty corners of Sweden's long publicly managed spheres, he has not done much (or not done it  properly), in the eyes of the public, to tackle youth unemployment.

His new foe is formidable. Social Democrat leader Stefan Löfven, who's been licking the PM's heels in opinion polls since being chosen and has now jogged past him.

Can former metal union head Löfven take Reinfeldt down in the youth unemployment question with his 90-day guarantee for youngsters – either getting them work placement or vocational training? (and funded by reinstating restaurant VAT, which was slashed rather controversially by the coalition).

So what's going to happen? September 14th, 2014 could lead the way to some seriously unholy alliances – unholy, because they would require quite a few people to do some serious volte-faces. A lot of people who said they'd never work with some people would have to consider working with said people.

The nowadays libertarian-leaning Centre Party said no thanks to the socialists when the latter floated the idea of  post-election cooperation. Nor did the Liberal Party (Folkpartiet) leap out of its seat in glee at the offer.

The problem though… the Centre Party's very young leader Annie Lööf hasn't yet inspired great voter confidence scores, and the Liberal Party leader Jan Björklund has come under heavy flak in his role as education minister, never more so than just this month when Sweden slid down the Pisa ranking of national educational attainment…. again.

Yet these two parties remain key parts of the jigsaw in the event of an indecisive result – and would inevitably come under pressure to cooperate across the political dividing lines.

The current leadership of the two parties are probably too closely associated with the Alliance to ditch it. But could new leaders of the same parties, while not ready to build a coalition with the socialists, at least cooperate with them in some key areas?

Björklund has two rising stars on his team who could, eventually, climb into the driving seat: European Affairs Minister Birgitta Ohlsson and Integration Minister Erik Ullenhag. Courageous, outspoken, and open with their ideological identities.

From a global perspective, liberals are perhaps not natural bedfellows with socialists, but Swedish socialists are, after all, Social Democrats, and spend more time listening to Springsteen than reading Sartre. In other words, they're quite trad, and not very rad. The leap isn't totally far-fetched.

Which brings us to one point. It looks extremely unlikely that the Social Democrats will strike any kind of deal with the Left Party. Partly because the real lefties are ballot-box toxic, but also because the Left Party – which criticized private providers of welfare services a long time ago – has less and less in common with the Social Democrats, who are in the middle of some kind of New Labour'ish free fall toward the political centre.

Time for quick draft equation. Let's say the Social Democrats get the most votes and the Alliance doesn't quite have the mandate to govern for a second term: whom would Löfven cooperate with? Well, certainly the Greens – but what if the two parties together still don't have a majority?

The Left Party – Voting on the floor of parliament, yes, but anything more formal, unlikely.

Liberal Party – No thanks, says Björklund. But will he survive the educating quagmire despite his public kowtow? And if not, what would Ohlsson and Ullenhag do?

Moderates – HA! Of course not.

Wait…. hold on… aren't we missing someone? Oh yes, the Christian Democrats! Ok, well let's say they scrape past the four-percent barrier to get into parliament, well then… sorry, we have no idea. Licking their paws in the back pews?

For a party with such an interesting past, created by Pentecostal fire-brand minister Levi Petrus, it is a shame that the Christian Democrats have had all their rough edges sand-papered down over seven years in bed with libertarians, conservatives, and liberals.

So let us be bold in our prediction. Stefan Löfven will use the Greens to help him seduce the Liberals. For show, the Liberals will put up one hell of a fight in certain key policy areas and the only way the "Red-Greens" will seduce them is by offering them at least… one ministerial post. European Affairs would be a natural, and maybe they can keep Equality. Culture? Also, don't forget that heading the parliamentary committees (utskotten) is a way to wield power.

Some portfolios, however, will in this scenario be a total no-go for the Liberals, such as education. Not only have the Liberals messed up in that area (at least in the eyes of the public ), but the "progressive" Social Democrats need Ibrahim Baylan to become Education Minister. Why? Because he is of "non-Nordic origin", which was key to the socialists' attempt to diversify its own ranks.

People from more combative political cultures living in Sweden may also wonder if we will at last get a bit of rough in the elections campaign. Will things get more exciting now that the stakes truly are high?

Sweden has long shied away from personal attacks in its election campaigns, but if the prime minister's grumpiness and one of the Green Party leaders' evil-witch cackle in a recent televised debate are anything to go by, things might get a bit dirty.