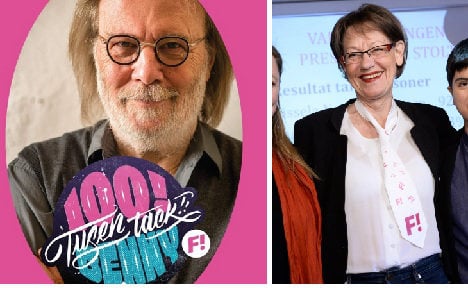 Swedes go to the polls next September and election fever has already started with Prime Minister Fredrik Reinfeldt and opposition leader Stefan Löfven getting stuck into each other in fierce debates along with the Swedish Democrats trying to tone down immigrant talk.

Meanwhile, Feministisk Initiative (Feminist Initiative – Fi) is hoping 2014 will be their big break, with a big donation from Benny Andersson to kick-start their campaign.

"I support the Feminist Initiative with money because they don't have the possibility of carrying out a reasonable campaign without it, and because they are needed in Swedish parliament!" the musical guru wrote in a text message to newspaper Expressen. Andersson added that he sympathizes "with Gudrun Schyman's struggle for equality."

Andersson is an outspoken supporter of the group and he has dug into his own pocket generously in the past on their behalf. In 2010 he contributed 300,000 kronor to Fi exclusively for their campaign posters and brochures.

Fi does not receive party support from the government and must foot all of their expenses on their own. They have a goal of raising 500,000 kronor this year for marketing expenses and thanks to their Abba benefactor the party is already a fifth of the way there.

"Benny's donation means a lot to us," Fi representative Gudrun Schyman said in a statement.

She added; "We are many who do not want to wait any longer. If we want an equal place in society, free from all forms of discrimination, the feminists must take a place in politics."

The Feminist Initiative was formed in 2005 and participated in its first elections in 2006. The party received only 0.68 percent of the vote and a party needs at least four percent to win a seat in the Riksdag (parliament).

In 2009 the party received 2.2 percent with some speculating the improvement was due to another large donation from Andersson.

Elections for the European Parliament take place in May with the Swedish general election to follow in September.