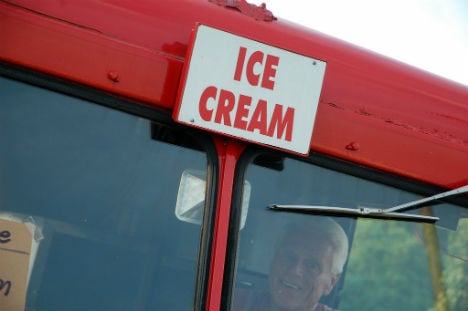 Residents living on a street in Eslöv filed a complaint about the noise of the truck to supplier Engelholm ice-cream demanding that they turn down the sound or switch it off completely.

"I've spoken with the business owner who drives the truck and he said they make it a bit louder in the winter in order to be heard properly because people are sitting inside," said Carl Gustaf Gudmundsson, president of Engelholm ice-cream to local newspaper Skånskan.

He added that the ice-cream truck only visited the neighbourhood once a month but were urged to act after a home owner contacted the local municipality.

It has since been decided that the jingle will be dumped in favour of a high-tech and virtually silent text message.

"We will put a message in the letterbox to these households so that they can be notified via text message instead," said Gudmundsson.

The ice-cream truck silencing follows hot, or should that be cold, on the heels of the prosecution for vandalism of Malmö businessman Percy Nilsson who admitting attacking an ice-cream truck which made noise outside his home.

Nilsson was reported to the police by an ice cream truck driver who discovered holes in the vehicle's tyre made by a drill during the summer.

He subsequently told the media that he "confessed" to the incident as he wanted to start a debate on ice-cream truck noise.

The intervention of the Malmö Redhawks hockey team owner has not sparked a flurry of complaints said Gudmundsson who added they get hardly any negative feedback about the jingles.

"However, there has been plenty of talk and jokes about what happened with Percy," he said.