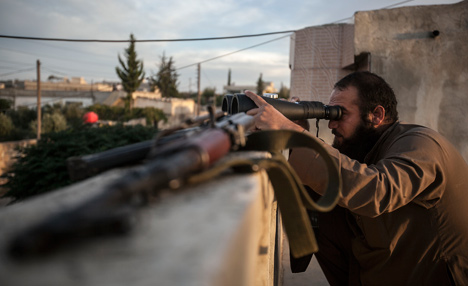 In 2012, 43,887 asylum seekers came to Sweden although the record year remains 1992, when there was a large influx from former Yugoslavia and from Iraq.

More than a third of cases were Syrians – 16,317 in total in the past year- The second largest category of refugee seekers were people registered as 'stateless'. The majority of those 6,921 cases were persons considered to be Palestinian. Migrants fleeing Eritrea were third on the list at 4,844 asylum cases.

For Syrians, escaping the carnage in their homeland, the number is an increase of 109 percent compared to 2012.

There was also an increase of eight percent in the number of children under the age of 18 arriving in Sweden without parents (ensamkommande flyktingbarn). A total of 3,852 unaccompanied minors came to Swedish shores in 2013.

Afghan children were the most numerous, followed by young Somalis and Syrians.

Figures published by the Swedish Migration Board (Migrationsverket) revealed that between January and November last year, Sweden received 48,928 migrants while France had 54,825 and Germany 85,562.

Last September, Swedish migration authorities ruled that all Syrian asylum seekers who came to Sweden would be granted residency in light of the worsening conflict in Syria.