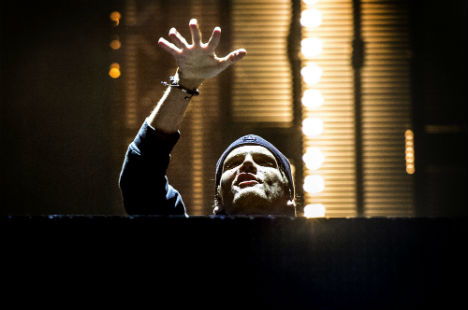 Hail to the DJ...Avicii dominated the airplay in 2013 but there was plenty of other music to enjoy argues The Local's resident critic in his annual review. Photo: Claudio Bresciani /TT

It's been another poptastic year for the Swedish music industry. According to figures from music bibles, Music Week and Billboard, Sweden is currently the third largest exporter of pop music in the world, just behind the US and the UK.

So don't let the cultural barbarians tell you otherwise – Sweden is a powerhouse of global pop music.

In 2013 we saw Avicii explode globally having rather smartly spotted a market for a crossover of country music and cheesy house. Whatever you think of his music, that was a pretty sharp move. He rules America right now.

Elsewhere there a was glut of good stuff. There was no room on the lists below for the likes of Håkan Hellström, Veronica Maggio, Le Kid, Lars Winnerbäck, Agnetha Fältskog or Jenny Wilson, all of whom provided us with some terrific music throughout the year

Indeed a few of the artists who did make my best of 2013 lists barely left an impression on the Swedish charts this year – although I suspect a couple will do so in 2014.

Henric de la Cour is seen as little more than a curious oddity in Sweden. This glorious gothic pop collection should have changed that – sadly, it didn’t. Nonetheless, a fantastic album.

Attar has been around for a decade or more on the sidelines of Swedish pop and this wonderfully rich collection of songs took a couple of years to record. It was worth every second.

Buzzy, female-fronted rock has not sounded this good since The Breeders were in their 1990s prime.

Club 8, have been making notably excellent electronic indie pop for almost two decades now, but have you heard of them? I doubt it. This is their eighth album – it's a corker.

Transcendant 'dream pop', sent skywards by huge clouds of melody – these guys might be on the brink of something big.

Elliphant has just signed a deal with Dr Luke, the American producer behind Katy Perry and Kesha's biggest tunes. Just watch this song go in 2014.

It was sheer madness that this gorgeous future classic barely registered on Swedish radio – it was a hit on US college radio, however, and deservedly so.

Laleh went a bit 'Coldplay' on Colors, with its gigantic, euphoric chorus and universal themes. A magnificent song.

This song has soundtracked global advertising campaigns – I reckon it's that whistle.

The Knife – Full Of Fire

I found The Knife's long-awaited fourth album deeply disappointing but Full Of Fire was spectacularly good. Great video too.

Worst song of the year

You have to admire the DJ who spotted the rather large hole in the market for a country/handbag house crossover but did Swedish radio have to play this track approximately 500 times a day? Yes, Avicii is now a global superstar but, please, nobody need ever hear this song again.