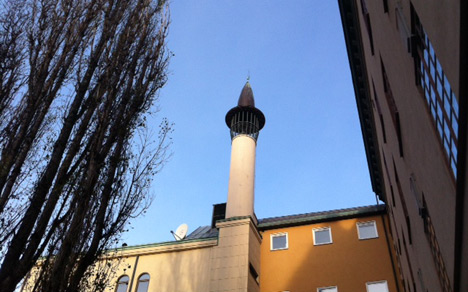 The central Stockholm mosque. File photo: Ann Törnkvist
"We receive hate mail, threatening letters or suffer vandalism around twice a month," said Omar Mustafa , president of the Islamic Association of Sweden. "This type of racist messages are quite common against Muslim communities."
Statistics from the National Crime Prevention Council (Brottsförebygganderådet – Brå) showed that police reports of hate crimes have increased in recent years, including those against Jewish and Christian groups.
"What is most noteworthy are physical attacks and and when our cemeteries are desecrated – overturning stones, painting swastikas and the like," said Lena Posner-Körösi, chairwoman of the Official Council of Swedish Jewish Communities (Judiska centralrådet).
Swedish synagogues are routinely equipped with CCTV and security guards to protect visitors.
"We would otherwise not be able to have our institutions open," said Posner-Körösi, who argued that the current situation in Sweden is deeply disturbing.
"Each incident may seem isolated, but people are targeting Jews, Muslims , homosexuals, Roma. All those who don't blend in with the picture of how to be in Sweden," she said.
The city of Malmö has been particularly affected by anti-Semitic violence in recent years. In December 2010, the Los Angeles-based Simon Wiesenthal Centre issued a warning to Jews advising them to avoid travelling to southern Sweden.
Omar Mustafa think it is important to highlight the hatred and the threats that various groups are exposed to. At the same time, he expressed understanding for those who elect not to file a police report.
"The vast majority of Muslim congregations who become victims choose to remain silent in order not to provoke new hate crimes," he said.
When asked about the development over time Omar Mustafa replied:
"This kind of hate message has been around all the time but it goes a bit up and down and in line with global events. When Muslims, for example, are described negatively in news reports threats often increase."
Mustafa argued that the solution to tackling the issue was not straightforward and required a broad approach.
"This is a huge social problem. This is nothing that we Muslims can handle alone."
He argued that while protection is a necessity, public education is key to tackling the problems of intolerance.
"The change must come from both policy makers and from regular people in office break rooms."
While hate crime with an anti-Semitic or Islamophobic message are more common, Christian groups are also exposed. A police report tally shows that incidences of graffiti and vandalism against churches and parish houses are increasingly common.