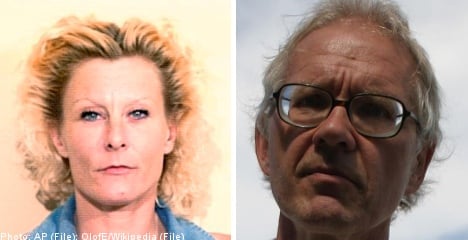 Colleen LaRose pleaded guilty to terror-related charges in 2011. Now prosecutors in the US have said the 50-year-old should serve "decades behind bars" for the plot, where she intended to kill Vilks, who sparked outrage by portraying the Prophet Mohammed on the head of a dog in a cartoon.

LaRose risks life imprisonment which is being called for by American guidelines. Her arrest in 2010 generated world headlines as her appearance as a white Texas woman didn't fit the stereotype of an Islamic terrorist.

"News of LaRose's arrest spread shockwaves throughout the West, as people recognized that the face of the terrorism threat had changed forever," prosecutors Jennifer Arbittier Williams and Matthew Blue wrote said in a pre-sentence filing.

In anticipation of Monday's sentencing they added; "The world is watching, and this sentencing presents an important opportunity to send a strong message to other lonely, vulnerable people who might be enticed by online extremists promising fame and honor."

LaRose was charged in 2010 with conspiring to kill Vilks. As part of her preparations it was reported by US media that she visited Sweden to live with and train with jihadis and to kill her target, Lars Vilks.

She was arrested in 2009 and admitted to terror charges two years later. She pleaded guilty to terrorism, plotting to kill in a foreign country, lying to the FBI and attempted identity theft.

An investigation by Reuters in 2012 revealed that LaRose had a difficult upbringing where she was sexually abused and turned to prostitution whilst also nursing a drug dependency.

"I survived a lot of things that should have rightfully have killed me," LaRose said in a 2012 interview.

Following a romantic encounter with a Muslim man she converted to Islam. She admitted to becoming radicalised after spending time with extremists saying that she "loved my brothers so much" but also added that she was "lost."

LaRose was aided in her terror plot by teenager Mohammad Hassan Khalid who admitted to his participation in the scheme last year.

Khalid is expected to be sentenced on Tuesday with prosecutors arguing to the judge for a sentence of "less than 10 years."

Prosecutors added that LaRose cooperated without any problems following her arrest but said that she took "pleasure" in recalling her past links with extremists.

"LaRose seemed to take pleasure and even pride recounting her glory days as 'the hunter. Her demeanour continued to grow wistful," said the prosecutors.

Meanwhile, Lars Vilks has reacted to the news of LaRose's impending prosecution.

"From my point of view they might as well set her loose. I wouldn't have any opinions about that," Vilks told the TT news agency.

When asked if he would feel personally threatened if LaRose was set free he added; "No, it is not the known that is the problem but the unknown. I don't think she would get herself caught up in that any more. She is neutralized as far as I understand it.

Vilks has faced numerous death threats since his drawing of the Muslim prophet with the body of a dog was first published by Swedish regional daily Nerikes Allehanda in 2007.